RahXephon, a Great Animation Series out of the Shadow of EVA

At first glance, the animation series of RahXephon tells the story of a God-chosen teenage boy riding a giant robot and fighting off villains. 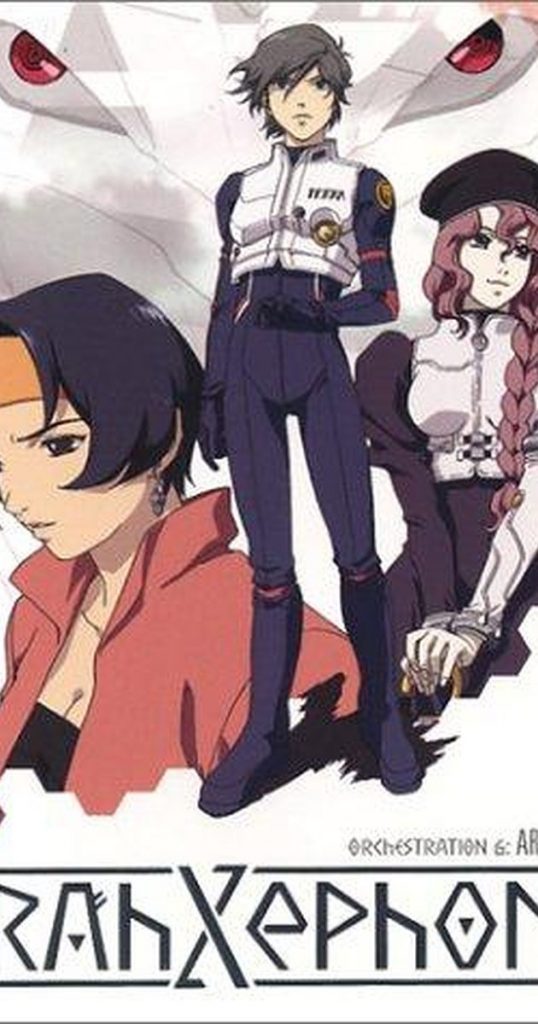 Ok, it’s not, but I guess the first impressions RahXephon left on most audiences are, how many similarities it shares with EVA. We both have a teenage boy coming out of orphanage (I don’t think Ayato Kamina神名綾人’s mother cared much about her son as to her career), whose city was under attack at the very first episode, who happened to be gifted with supernatural abilities to command an imposing giant robot.

Well, that’s episode one. The standard OP from episode two brought out more similarities, in the style of Montage and the way things were presented. Luckily, the smooth and gentle music constantly reminded me that it’s different from EVA’s battlefield anthem.

The similarities didn’t stop here, but I want to move on to the references, as both series made reference of ancient myths in one way or another. In EVA the author brought out the Dead Sea Scrolls, about Adam and Lilith in Jewish mythology, and the Angels that followed. But more than that he engaged them, he based his recreation on the Old Testament and told the stories of the warring factions between Adam and Lilith. In this way the Angels were not only giant monsters to be defeated, but species with mind and purpose. And more than half the world’s population adheres to Abrahamic religions and resonates with his vision. But for RahXephon, the name of designer Bähbem comes from Maya Civilization, it borrows notions from Aztec Civilization, it names its Dolem’s with musical tempos, fine. But none of this constitutes a self-fulfilling story, an interpretation of the civilizations under reference. At the end of the day, nobody knows where the alien species of MU came from, why they invaded Tokyo, why they looked so much look us humans. In EVA they are Angels incarnate, but in RahXephon they felt more to me like fancier names for appropriate characters. Maybe ancient civilization experts may find the names intriguing, but for everybody else, fancier names were all those references amounted to.

But fine, RahXephon could well happen against a good and decent backdrop, if not a spectacular one as the once-in-a-lifetime EVA. Good thing RahXephon didn’t follow the steps of Icarus and fly too close to the shining sun of EVA.

Perhaps a bigger problem for RahXephon was its design of the Dolem’s. In EVA the protagonist-driven machines fight Angels with fist and blood, so that a six-year-old boy not knowing the intricacy of human society could well fall in love with the giant robots just like he loves watching Ultraman beating down monsters, if his mom didn’t ban him from the blood and sex suggestions in EVA in the first place. In RahXephon, well, they fight with soundwaves? Excuse me, this is not Your Lie in April, the audiences didn’t stand a single chance of appreciating which monster sings better soprano.

So basically, there’s no fighting at all. Starting from episode four, the story goes like: Dolem appears, Dolem attacks, Xephon appears, (maybe some twists of Xephon driver Ayato Kamina神名綾人’s inner thoughts), Xephon fights back, Dolem dies, which take half an episode’s time, leaving the other half for character development.

And in the rare moments where there’s actual engagement between two giant robots, the scenes were, sluggish, at best. Put it in slow motion, you would find it’s like a run-out-of-budget office filling those frames at 12fps. I don’t think most people could bear this, even this was animation more than a decade ago.

But this is not to say RahXephon has no merits when compared with EVA. One thing I found very fond of RahXephon was that, it has a delicate plot with the most elaborate and intricate people network, that is revealed and updated episode after episode.

In EVA everything looks fixed, like the scripted Human Instrumentality Project. Throughout the episodes we just saw more of grand EVA world being revealed, but existing parts of it, maybe except the relationship between the EVA drivers, didn’t change much.

The storytelling of RahXephon was something different. Throughout the 26 episodes we keep seeing new personalities being added to the characters, new twists added to the relationships. It’s like, at first we know Shougo Rikudou 六道翔吾 is Haruka Shitou 紫東遙’s uncle and Ayato Kamina 神名綾人 was her friend rescued from Tokyo, only later to learn that Shougo Rikudou 六道翔吾 was Ayato Kamina 神名綾人’s grand parent. And there’s the constant illusion of Ixtli all around adding to the mystery. So throughout the season we saw an intertwining relationship map gradually coming to shape, and when it’s ready 26 episodes later, gosh it’s amazing.

In an analogy, EVA was loading a famous canvas painting, we saw it more and more clearly through the season, and found it an unparalleled masterpiece by the end of the season; RahXephon was watching an ever-changing motion picture, at the end we found its story most appealing.

And about its theme. The story of RahXephon in its whole entirety centered on the human emotion of love, and the different interpretations of it. There’s love between the TERRA commanders, love between the research scientist and his aid, love among the high school boys and girls, but above them all, the binding love between the two protagonists that transcends time under the most improbable settings. The series of RahXephon used its 26 episodes to salute this emotion that forms the basic fiber of our society. Throughout the season we may see hate and grudge and envy and mistrust among people, but at the very last, we found love transcends them all. While EVA focuses on abstruse redemption, RahXephon salutes universal love.

So where does this all land? Although RahXephon shares so much similarities with EVA, it does tell its own stories with its own merits. Although there are rooms RahXephon could improve on (and there are a lot), like its sluggish and repetitive fighting scenes, RahXephon used other parts of the story to develop a most sophisticated people network, and it keeps audiences on suspense about the relationships until the very last episode. Few stories handle time travel well, but RahXephon ingeniously used the notion of time difference, so that the love between the protagonists could transcend time, this human’s eternal hurdle. If Neon Genesis Evangelion would earn people’s marvel, then RahXephon well deserves our heartfelt affection, and for this matter it’s a great animation.

RahXephon, a Great Animation Series out of the Shadow of EVA by Huang's Site is licensed under a Creative Commons Attribution-NonCommercial-ShareAlike 4.0 International License.

← Flight Log of All Nippon Airways Flight 955 from Tokyo Narita to Beijing on May 9th, 2017
An (Unsuccessful) Bike Tour of BaiYangGou, Beijing →