Justice, and the enforcement of it, has changed. In the 22nd century, Japan enforces the Sibyl System, an objective means of determining the threat level of each citizen by examining their mental state for signs of criminal intent, known as their Psycho-Pass. Inspectors uphold the law by subjugating, often with lethal force, anyone harboring the slightest ill-will; alongside them are Enforcers, jaded Inspectors that have become latent criminals, granted relative freedom in exchange for carrying out the Inspectors’ dirty work.
Into this world steps Akane Tsunemori(常守 朱), a young woman with an honest desire to uphold justice. However, as she works alongside veteran Enforcer Shinya Kougami(狡噛 慎也), she soon learns that the Sibyl System’s judgments are not as perfect as her fellow Inspectors assume. With everything she has known turned on its head, Akane wrestles with the question of what justice truly is, and whether it can be upheld through the use of a system that may already be corrupt.

Sounds familiar? Yes, I’m pretty sure I’m not the only one that immediately associated Psycho Pass with Minority Report just a few episodes in. In both works, police officers were getting help from some oracles about whether or how likely crimes would take place, and both works evolve around the cracks and fissures within their respective and supposedly perfect systems. And since Minority Report was a 2002 movie (adopted from an earlier novel) and Psycho Pass was a 2012 animation, it’s easy to accuse Psycho Pass as a plagiarist.

At least that’s what I had in mind, a light hearted experience treating it as a Japanese version of Minority Report in its first few episodes, which happened to be those not-so-exciting daily routines doubled as introduction. I was even envisioning a couple of girls bathing in hot spring water in episode 16 when the police chased the bad guys into the forbidden part of Nona tower, where the system was located. And it was a kind of lottery-winning pleasure seeing a bunch of human brains as the core of the Sibyl System, though nowadays audiences enjoy surprise much more than expectation.

But perhaps more importantly, the whole story of Minority Report evolved around some personal business, of PreCrime Captain Anderton’s quest to search for his missing son and prove his innocence; while the series of Psycho Pass discussed the philosophical question of the destination of human mind and society. The plot of Minority Report went around the director of PreCrime exploiting a flaw in the PreCrime system, a human flaw, or unintentional negligence to be exact, and protagonist Anderton going through lengths to prove his innocence. There’s more car chase and science gadgets and the PreCrime system is the backdrop against which the stunts and explosions on stage were capturing the audience’s attention, a backdrop nonetheless, the philosophical impact of the PreCrime system was never on center stage. At the end of the play, the protagonists on stage turned back and pointed at PreCrime saying, “you are bad, we don’t want you”. It’s Tom Cruise, so it’s an action movie first and foremost.

But Psycho Pass is something different, the Sibyl System is so integrated into people’s lives that it’s the focal point of the series. We saw the tentacles of Sibyl into as street cameras, security guards and job evaluations, compared with PreCrime in Minority Report in a secluded operational room, with the lives of everyday people unaffected by it should they not plan to commit murder. The series of Psycho Pass, at least the second half of it, evolved around the legitimacy of such a system in human society in the presence of an outlier Shōgo Makishima (槙島 聖護). Shōgo Makishima was committing crimes and the Sibyl System couldn’t judge him, this conflict most evident in episode 11, when good and evil by humanity represented by Akane Tsunemori and audiences were in contrast from good and evil by society represented by the Sibyl system, where protagonist Akane Tsunemori struggled but couldn’t pull the trigger to kill Shōgo Makishima. And by making his way into the headquarters of Sibyl and agriculture factory, for more than once Shōgo Makishima came close to bring total annihilation to human society. In the animation, Sybil represented a step forward from the courtroom system today, but Psycho Pass repeatedly left us thinking whether that’s the right path forward for us as a society, that whether there’s still humanity left when our lives are summarized in a number provided by a machine. 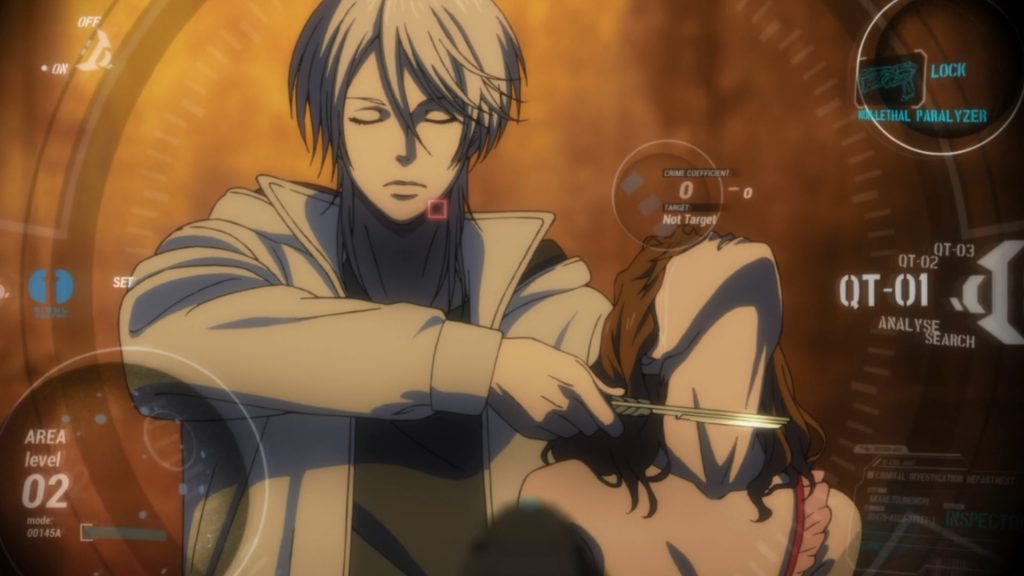 Oh yeah, the series was beyond the antagonist Shōgo Makishima, as Sibyl system was everywhere in people’s lives. A number given by that system separates the enforcers from their more superior inspector, it separates prisoners from their peers outside the rehab centers, it separates people with their dream careers that they worked hard for. It’s a thought-invoking process learning later in the day that Sibyl system was near perfect, but wasn’t.

Apart from the playful Shōgo Makishima, we saw in the series different people react differently to the Sibyl system, the protagonist Akane Tsunemori was actively engaging with Sibyl system, breaking rules and boundaries while at the same time keeping Sibyl systems intact for the benefit of the masses, her superior Nobuchika Ginoza was scripted and cared more about drawing lines and staying within his duties to keep his crime score from going up, protagonist enforcer Shinya Kogami was sort of overwhelmed with the guilt that he lost his partner harbored distrust towards the Sibyl system that failed to deliver justice to his partner.
This coupled with the numerous philosophical quotes in the series did bring Psycho Pass to philosophical high ground, somewhere few animation series had every reached.

Any weakness for the series? It’s hard to say. The whole series did spend quite some time talking seemingly mundane daily duties of the officers in its first half, this was perhaps to fill enough time so that its season one has twenty-two episodes for two quarters, but hardly any personalities got developed during those daily duties, which seemed too long for just an introduction.

Also, I’m not a big fan of the background operational sound of the weapon “dominator”. It should be a very tense scene when an enforcer or inspector is hunting down some bad guys, he or she just doesn’t wait for ten seconds for the handgun to say into his mind “Psycho Pass 300+, kill him” before pulling his trigger. But perhaps, this is Psycho Pass’s way to stay itself clear of action animations, by intentionally slowing things down when it should be tense. A necessary evil, tops.

As for music in the series, I want to once more get back to episode 11 which was my favorite, where Beethoven’s Ore to Joy oddly accompanies a hunter’s killing spree, a song praising humanity at its best was used at a machine-man at his most wicked. If I had a list for best animation music this would definitely be on it.

So to conclude, Psycho Pass did manage to tell a most intricate story against a futuristic setting with profoundness that gets everything thinking, and it did a good job. It’s a pleasant experience just watching the series, an enlightening one of you think about its implications.