Astra Lost in Space, a Beautiful Fairytale Far-Fetched from Reality

When I looked at the poster of Astra Lost in Space, I saw a group of younglings among stars and planets. When I watched its first trailer, the scenes were like the 2013 movie Gravity being tamed by cartoon brushstrokes. And its second trailer was like the first part of The Martian (2015), only that the entire team was stuck behind this time. I thought, this must be some exciting tales of a Sci-Fi journey through space, like these movies.

And I was wrong, the first of many curveballs the series threw at me. 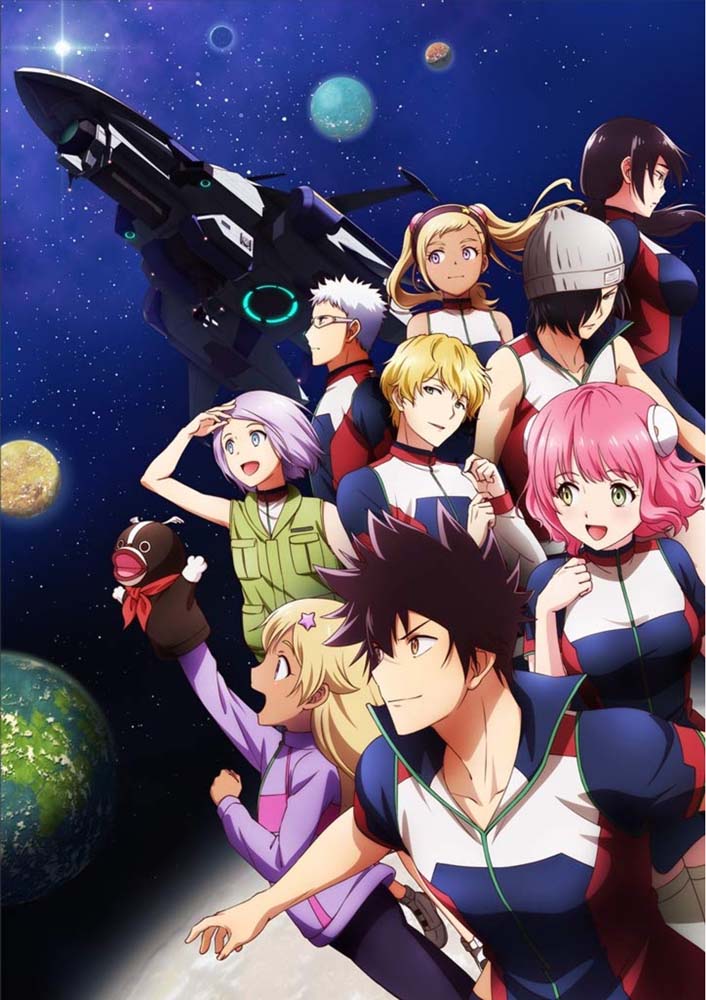 Poster of Astra Lost in Space

The aforementioned space movies did their best to be realistic, albeit some were better than others (Gravity was definitely the latter). However, the portable artificial wormhole that started everything in Astra Lost in Space was much a naive conception than technology from tomorrow, which a well-educated high school student should know is physically impossible.

The unscientific artifical wormhole that started everything

A step further, I began to frown upon its resemblances two not-so-successful animes, “7 Seeds” and “High School Prodigies Have It Easy Even In Another World”. All three titles evolved around a group (in case of 7 Seeds, groups) of people that were elites in their own fields (that were amazingly sub-20 years old), trying to survive in a world that’s not the present-day earth. While “7 Seeds” with its alluring post-apocalyptic settings could blame its failure on Netflix’s illogically rubbish adaptation (as the Manga was much better received), everything is wrong with “High School Prodigies”, from its needlessly long name to its absurd and sometimes degenerate plot.

If I take a detour and look at the world of anime or manga these days, it’s hard to escape from the increasing number of titles whose stories took place in a different world. I mean, apart from the shining few, the rest of them were superficial and lowbrow. They followed the doctrine that a drunk driver killed the protagonist and reincarnated him to a different world, who started an adventure to nowhere with a bunch of girls and elves and witches. They attracted audience with breast cups and provided them with transient joy, as life in a different world is dissolute and carefree, which is exactly how things aren’t supposed to be in real life.

Since our Astra astronauts had no contact with earth until halfway through the last episode, and the artificial wormhole was as scientific as a drunk driver when it comes to teleporting spirits, I certainly found it appropriate to compare “Astra Lost in Space” among other titles in the otherworld genre, rather than the more serious Sci-Fi ones. And the result was quite encouraging. To begin with, it managed to tell a self-contained story within 12 episodes, while giving each one of its nine characters enough development that transcends their Wikipedia description. And looking back, its 12 episodes were filled not with daily chores, which conventional titles in the otherworld genre were rather fond of and good at. Instead, there were enough twists of plots and suspense and foreshadowing meticulously planned that audiences would have a fulfilling watching experience to a story with unpredictability, for which few other works could rival among the entire anime world. I mean, that’s for the characters themselves. By comparison their expeditions of the five planets were pretty certain, with some joyful times and some hardship that will be overcome by revealing one character’s background.

Arguably, the best part of “Astra Lost in Space” was that, it’s the perfect incarnation of the words “per aspera ad astra”, or in English, “through hardships to the stars”, as the characters found a plaque with these words in the spaceship that they stumbled upon, which they named “Astra”. These words summarized their journey in different aspects, of building a team of trust with presence of a mole onboard, of overcoming miseries of their old lives while realizing people in the real world wanted to get rid of them as outcasts from cloning. Not to mention the navigation among different planets finding enough food and water and moral support along the way. Maybe not so coincidentally, the planet that they were heading back to was also called “Astra”.

But this is not to say “Astra Lost in Space” was without problems. To begin with, the show revolved around nine people wearing the same uniform living under one roof. So in addition to hair colors, they needed to have different personalities for audiences to tell apart. However, I think most of the characters displayed too much personality, to a point of uniform stupidity that does not conform to human society. Without expertise in respective fields, it would be like watching a group of kids at primary school playground trying to save the world.

This picture about Aries Spring(アリエス・スプリング), our female protagonist, very much summarized her mental age.

And in line with the primary school mentality, the many events in this series were over-simplified and not seriously treated. I just wasn’t excited about many supposedly intense scenes like rescues and escapes, barely laughed at the many supposedly comedies. With the series’ many twists of events one may not be able to predict what will happen in 20 minutes’ time, but forecasting the next 20 seconds was never difficult. The result was that most of the time, I found it rather appropriate to watch the series at 2x speed. And of the many animes that I had watched, that’s a realm only Naruto was able to reach.

Comedy scenes that were barely laughable. 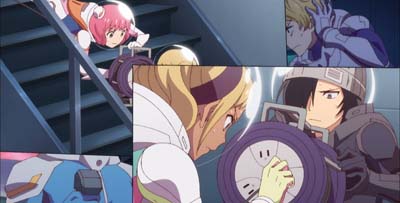 Intense scenes that were hardly thrilling.

Of course, one could argue the primary school mentality reflected how the characters were neglected and mistreated by their parents, and it could serve as a comparison as how much the characters matured at the end of the series. The oversimplification of many events was to guarantee enough character development in mere 12 episodes. These made sense, only to a degree, as the character’s grownup had equally enough to do with a happy ending necessity.

As for the world such story took place, it’s also a setting that only kids would buy. “Astra Lost in Space” took place in a world where a single government reigns over all mankind, where notions of nations were abolished and languages were unified. Even worse, the central government instructed people to withhold 100 years of tumultuous history to their offspring, hoping this would bring mankind perpetual peace. Looking at this from an adult’s standpoint, it’s actually a huge step backward for mankind, and ironically I think the authors of “Astra Lost in Space” knew this, as in parts of the new world a monarch was restored beyond symbolism. I think there were topics earnest enough for “Astra Lost in Space” to be centered on, like relations between our characters and the persons that they were cloned after, that would invoke genuine reflection among serious audience, not just kids.

To conclude, I find in many ways “Astra Lost in Space” was too much a fairytale. It started against the background of surreal galaxies, it traveled through picturesque and exotic planets that were carefully planned and exquisitely painted to always draw curiosity, and its story of 9 characters going through various hardships reaching their goal would be rather cheerful to an underaged audience. Its artistic beauty and twistful plot should earn itself top-rank acclaim among the anime world, not just in otherworld genre. But at the same time, its story happened in a world of fantasy conjecture with many of its scenes just didn’t check out under scrutiny from refined tastes. Its 9 characters were well distinguished from each other, but unfortunately also to the real world. I expect it to be an opera, like the space movies I mentioned in the beginning, good or bad. It turned out to be a circus.

Astra Lost in Space, a Beautiful Fairytale Far-Fetched from Reality by Huang's Site is licensed under a Creative Commons Attribution-NonCommercial-ShareAlike 4.0 International License.