Teenage Mutant Ninja Turtles: Out of the Shadows, a kids movie rated PG-13 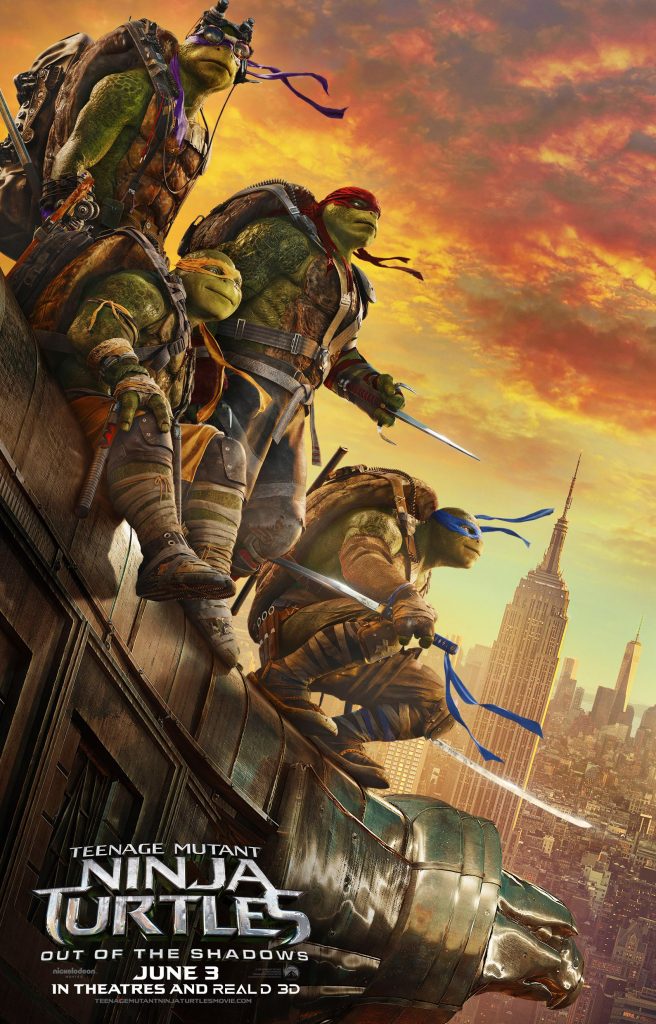 Teenage Mutant Ninja Turtles: Out of the Shadows Poster

Being adapted from a comic franchise, Teenage Mutant Ninja Turtles: Out of the Shadows could easily be OK, because the comic already sets an exciting storyline that the movie just needs to follow.

Also being adapted from a comic franchise, it’s hard for the movie to be excellent, because any deviation from the comic easily degrades into betrayal, and childish comics are rarely excellent in professional eyes.

So far, as for comic adaption, the only excellent works in my opinion are the Batman’s Dark Knight by Christopher Nolan, and it took such genius director and writer for the adaption to be excellent.

So to me, Teenage Mutant Ninja Turtles: Out of the Shadows is at its best, average.

Since it’s a reboot, the movie sort of had to evolve around the powerful ooze that mutates people into monsters, just as its 1991 predecessor. I don’t care to watch a kid’s movie featuring pops from the last century that’s older than myself, but as its plot on Wikipedia reads, that movie didn’t involve any extraterrestrial creatures being a third party besides the good turtles and the bad guys.
To me, alien creatures from another dimension are like the one-size-fit-all glue which the directors called upon when they themselves couldn’t round up the story, and only the kids would buy into that.

But to kids, the movie also touches on topics like the turtles’ identities in a human society, the city’s acceptance and recognition towards them, that are too much beyond the cognition of kids. Elementary-school-goers would certainly have a hard time comprehending some turtles’ wish to become human, and the rift among the turtles that followed. But this doesn’t hurt, since all this status and recognition stuff took second place when all the actions and stunts were on.

Perhaps for kids, a bigger problem at hand is that, with all the fighting and violence and sexually suggestive scenes, what would parents send them to watch, the PG-13 rated Mutant Turtles or the lovely rabit from Zootopia?

Scenes sexually suggestive enough for MPAA, but not enough for its grown-up audiences.

But when the kids grow up enough to be PG-13-capable, a.k.a. teenagers, they would certainly find certain things in the movie hard to understand, like the police convey SUVs that did absolutely nothing when the motorbike gangs were raging around them placing bombs. The only possible explanation is that budget cuts forced the police department to choose Google’s robots over human drivers. Or, the top-secret TCAI lab guarded by only one mid-aged Mexican, who happened to be a big fan of the Falcon. Excuse me, did your boss tell you that he’s with Shredder, whom this cameraman brought down in the last movie?

The convey SUVs could easily knock off the bomb-wielding motor-bikers, but they did absolutly nothing. The only explanation is that they were driverless.

So the top-secret TCAI lab guarded by only one mid-age Mexican, who happened to be a big fan of the Falcon.

And there’s this shoddily built camera wirings, intended to add but very little comedy to the show.

Also, maybe in correspondence with the 1991 movie, there needed to be two monsters from the purple ooze, but I’m not so sure about the way the rhino and the warthog were depicted. In the movie, despite his army of highly-trained masked ninjas, Shredder the badass were still looking for errand boys, and he set his eye on the two brainless convicts that sadily lowered IQ of the whole street. And throughout the movie, the two monsters only served to add comedy to the show by clowning themselves. Certainly, grown-ups are used to more matured jokes than simply being silly.

Phones given to the two convicts that’s supposed to be untraceable.

So after the policeman break into the same bar, and threatened with some vandalism, the store owner immediately handed out the tracker.Come on, are things so easy and straight-forward?

Following the GPS tracker, the policeman tracked down the two convicts.Come on, as a policeman yourself, aren’t you worried that whatever device you’re holding could also tracked? And the bad guys in the movie are all so stupid that they didn’t think of tracking the policeman?

It seemed to me more like two monsters riding baby bikes, than guarding the portal device.

More childish behaviors from the monsters.

To conclude, Teenage Mutant Ninja Turtles: Out of the Shadows could easily be average, but in many ways, it didn’t, as it’s having a hard time appealing to either kids or grown-ups. Despite its good box office performance (which compared to its budget, could be called a success), it’s just another action movie on the market, aimed for kids but rated PG-13.

Teenage Mutant Ninja Turtles: Out of the Shadows, a kids movie rated PG-13 by Huang's Site is licensed under a Creative Commons Attribution-NonCommercial-ShareAlike 4.0 International License.