Fourth day of our Alaska trip. We would be driving from Seward to Healy, the gateway town to Denali National Park. 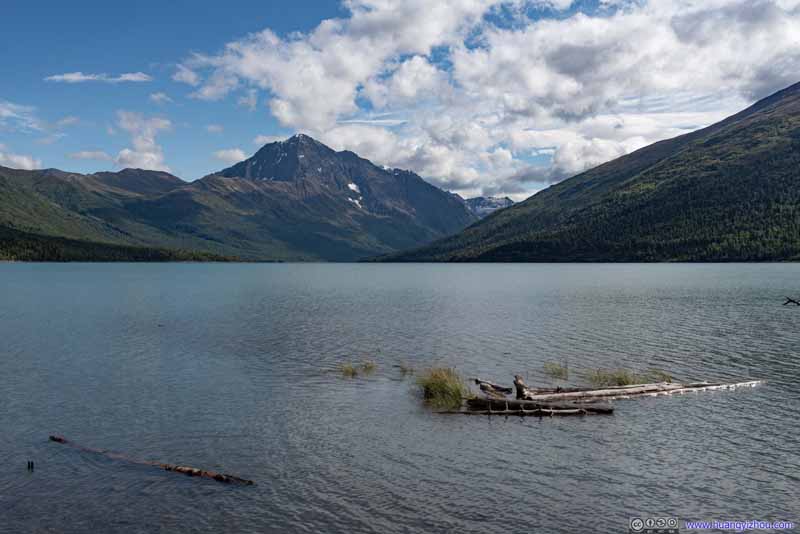 The 373-mile drive from Seward to Healy was predicted to take 6.5 hours by Google Maps. Since we didn’t have anything else planned for the day, and the previous two days have been exhausting, we woke up late and set off at 11am.

The drive out of Seward was in a drizzle, just like how we arrived three days ago. 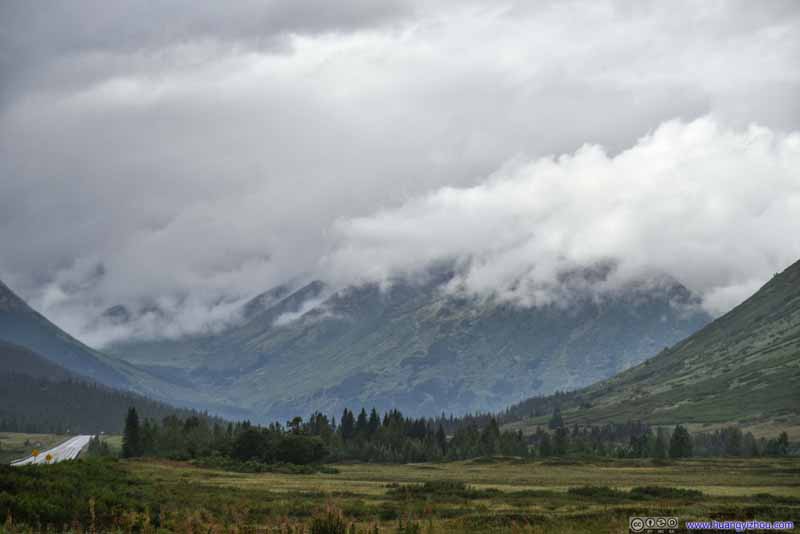 We made a brief rest stop at Turnagain Pass, where I snapped this photo of imposing distant mountains behind clouds. 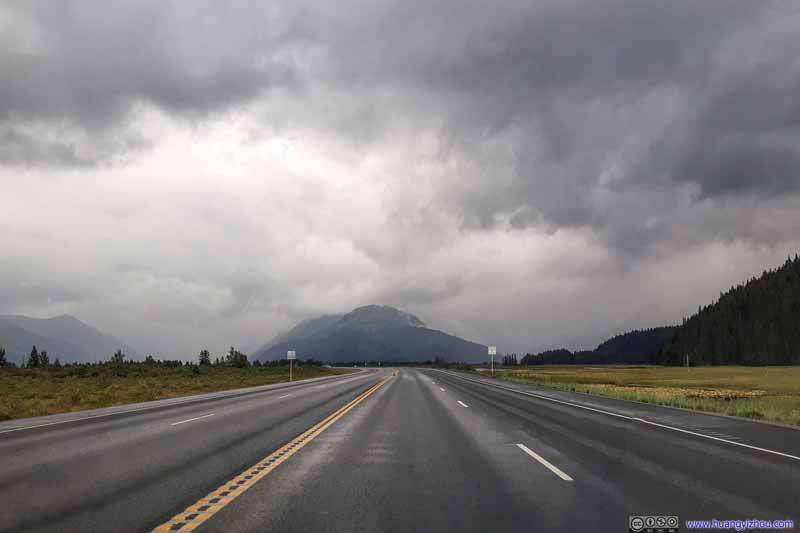 On the southern shore of Turnagain Arm, leading to the town of Portage. When we were driving towards Seward three days ago, the glaciers along Portage Valley was magnificent in the rear-view mirror. Unfortunately, this morning they were mostly veiled by thick clouds.

Then, weather got better as we were rounding Turnagain Arm. 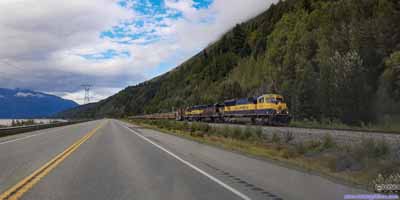 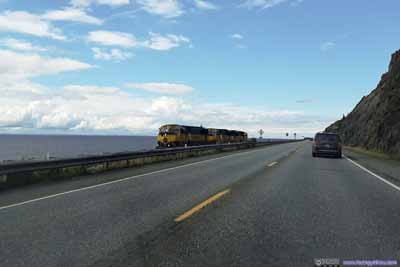 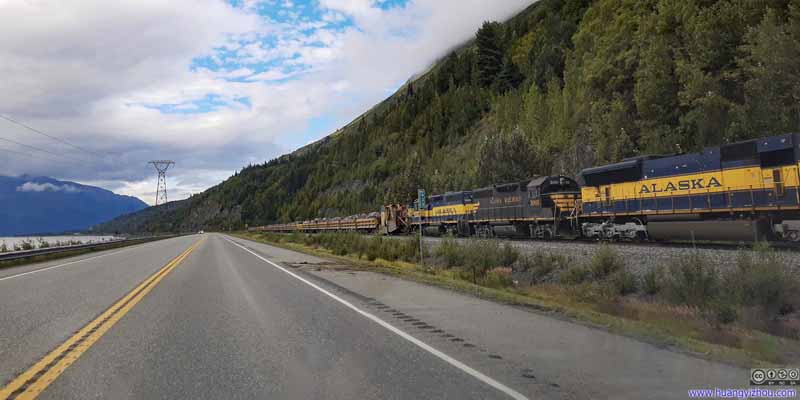 Freight TrainFor the first time in our trip, we spotted Alaska railroad in motion.

We made a brief stop at Potter Marsh, an expansive wetland just south of Anchorage. The sight of wetlands was rare in Alaska, and the transient mists surrounding distant mountains made it elusively stunning. Best of all, Potter Marsh was a popular wildlife viewing spot, and just in front of the roadside turnout were a group of ducks in the water. 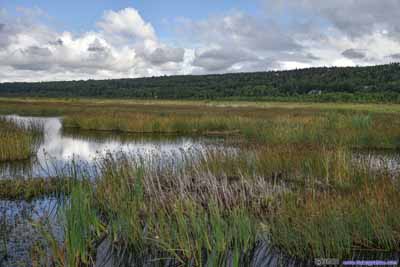 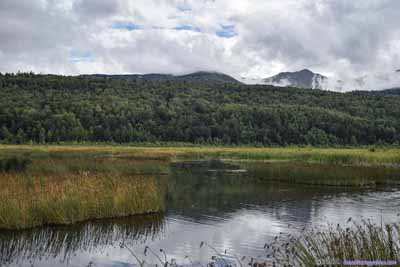 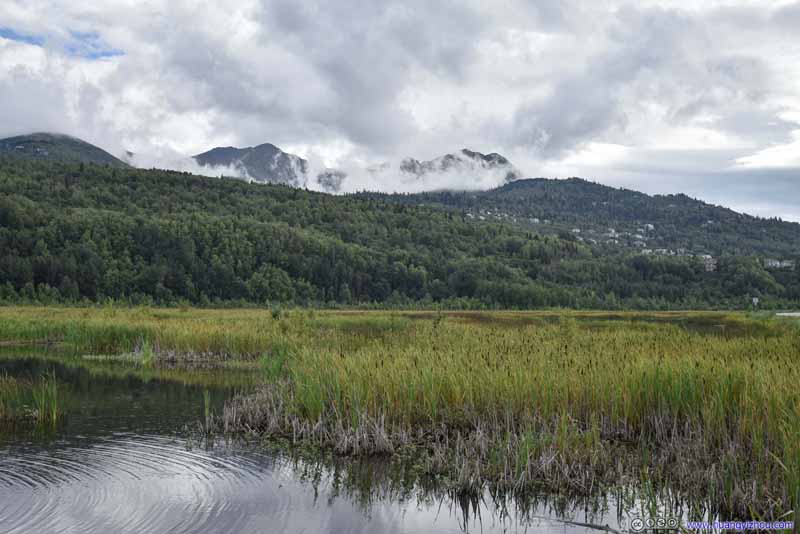 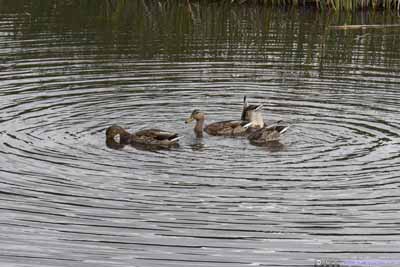 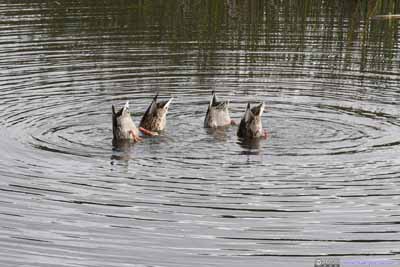 After having lunch in Anchorage suburb, my friend browsed through some website and recommended that we make a stop at Eklutna Lake, a scenic lake located in Chugach State Park.
After turning off Glenn Highway, a small 2-lane country road wound itself up the mountain for 10 miles, after which we were by the lake’s side. 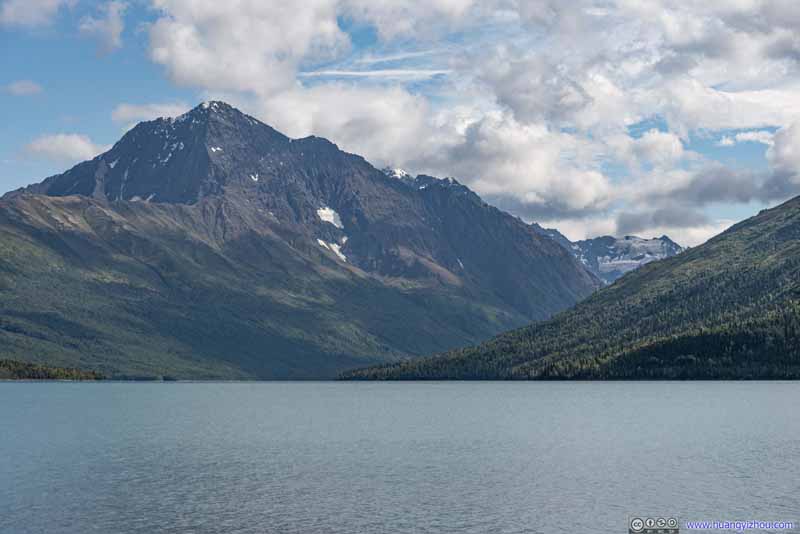 Unfortunately, the lakeside beach seemed rather infested by bugs, so we didn’t spend a lot of time appreciating the scenery. The lake should be an ideal place for hiking or kayaking, we have neither the time nor equipment for those activities.

A small plane briefly disturbed the tranquility at lakeside. It was far from us though, as these photos were cropped to 1125mm equivalent. Later I learned there was a small airport (“Bold Airport”) at the southern end of Eklutna Lake. The airport had a 300m runway, serving about 200 flights per year.

This was like the mid-point for our drive to Healy, so after taking some naps, I resumed driving. 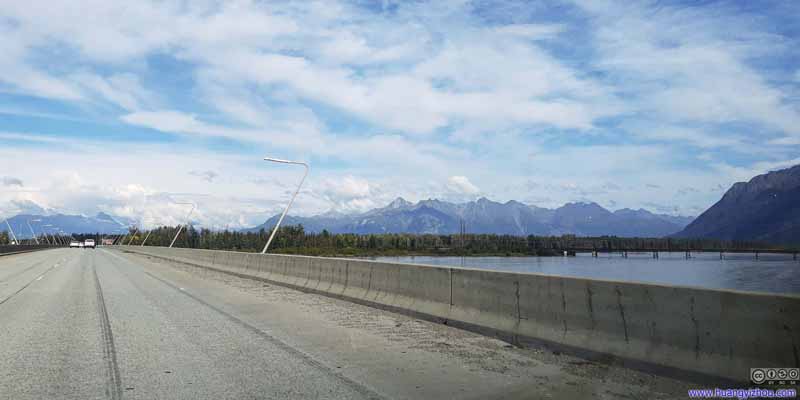 After crossing Knik River, Park Highway made its way through developed towns like Wasilla, with lots of traffic lights and traffic. But after that, civilization faded behind us and we were entering thick forests. 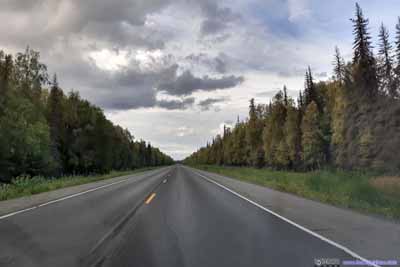 We made a final stop at Alaska Veterans Memorial, by Denali State Park, one of the few roadside service stations along the way. 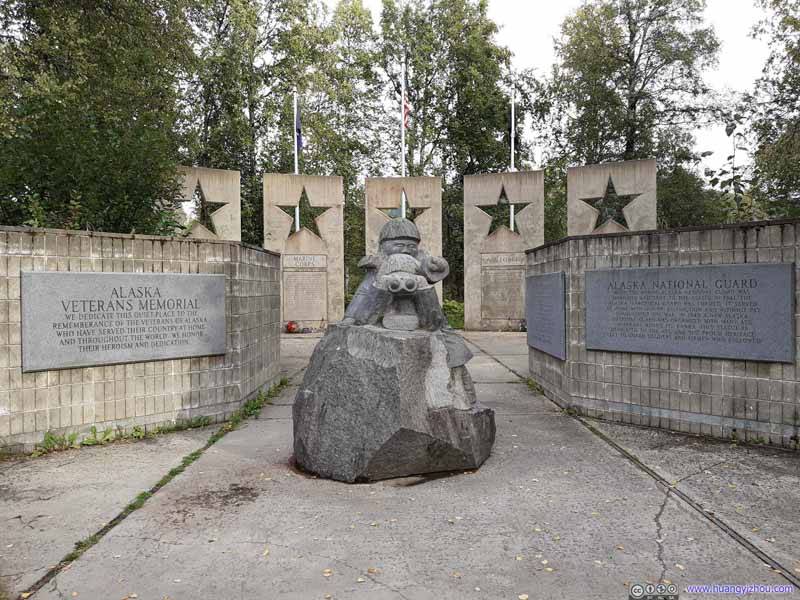 Given the proximity to Denali Mountains, I thought this would be a great spot to launch my drone for an aerial tour. Unfortunately, the Denali Mountains were mostly behind clouds that afternoon. In addition, I didn’t recall the exact boundary of Denali National Park that day, so I erred on the safe side by staying behind Chulitna River. I could have easily crossed that river and went a couple miles ahead before reaching no-fly zone.
Here’s video from my drone: 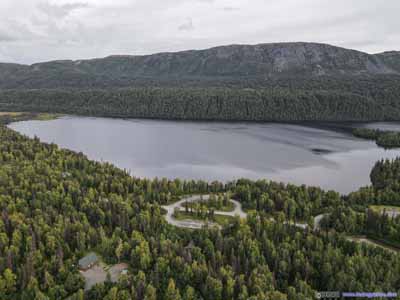 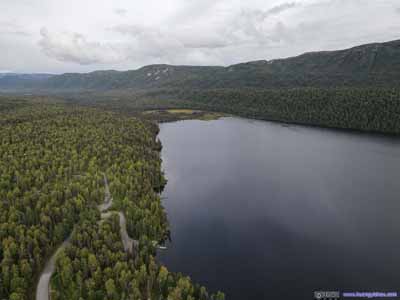 Not long after leaving Veterans Memorial, there came the worst part of the trip, roadwork. An 11-mile portion of Park Highway was completely dug up and waiting for new asphalt. I thought conditions of Park Highway were far from needing renovation, so this was done probably to add passing lanes as slow vehicles could cause quite some delay on 2-lane portions.

While a pilot car was supposed to lead us through the entire 11-mile roadwork (we learned this during our return), it’s 7pm and the workers were gone for the day, so were some of the pilot car drivers. Instead, pilot cars would only be present for some sections (which itself was very wide with no workers present, didn’t see much a point for pilot cars), after which it was free for all. Despite the 10mph speed limit sign on this pothole-ridden road, abandoned cars on the side with broken axis or flat tires, nobody seemed to abide by that speed limit. And it’s a constant worry whether our rental sedan would make it across, and gladly it did. 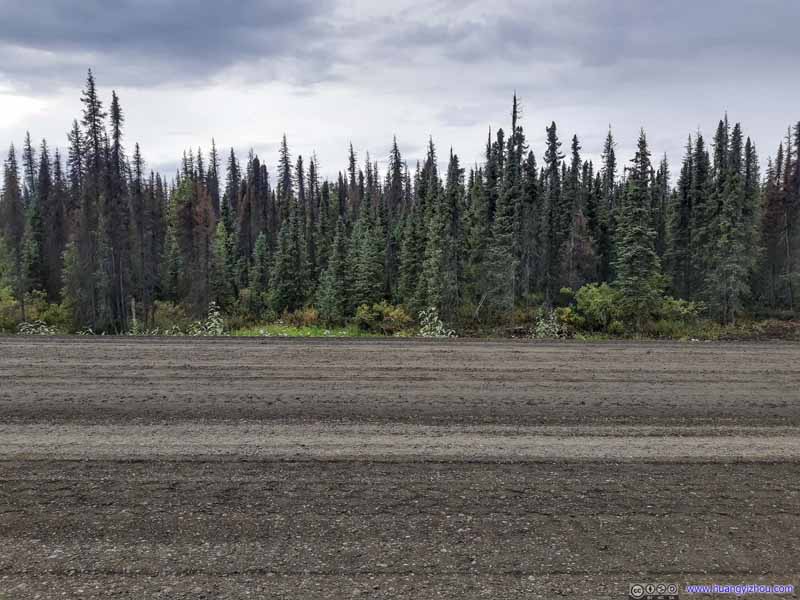 After that as we were heading north, the colors of surrounding landscape changed from lush green to a palette of passionate brown and fiery red, an exciting and refreshing sight towards the end of the day. 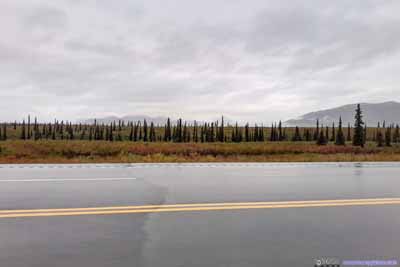 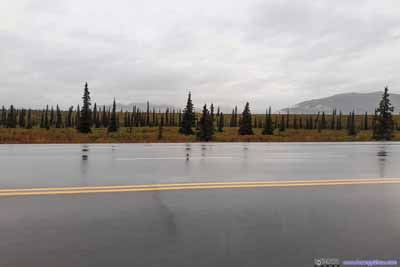 This expansive taiga field was probably the most exhilarating sight of the day, a preview of what Denali National Park had to offer. 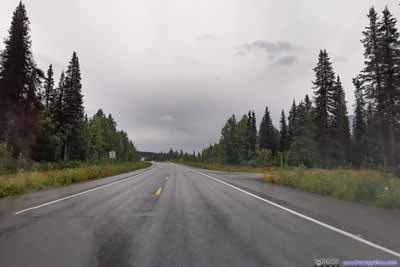 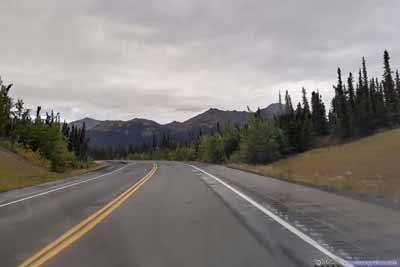 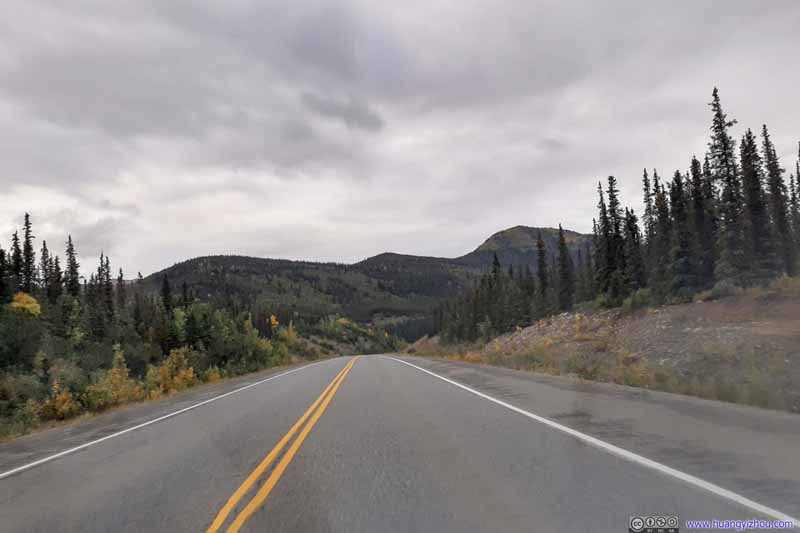 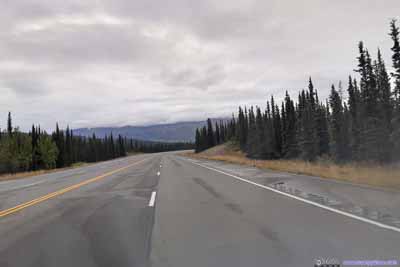 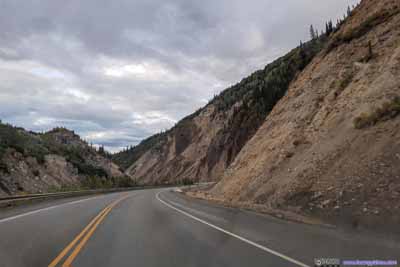 The landscape was decorated with vivid colors as we approached Denali National Park.

Finally, at 9pm, we arrived at our overnight lodge outside Denali National Park, and called it a day.

Day 4 of 2020 Alaska Trip, Driving to Healy by Huang's Site is licensed under a Creative Commons Attribution-NonCommercial-ShareAlike 4.0 International License.