The outbound flight segments of my July 2020 trip to Idaho. Coincidentally, the flight served as an aerial tour of the forests and mountains that I was to explore over the coming week. 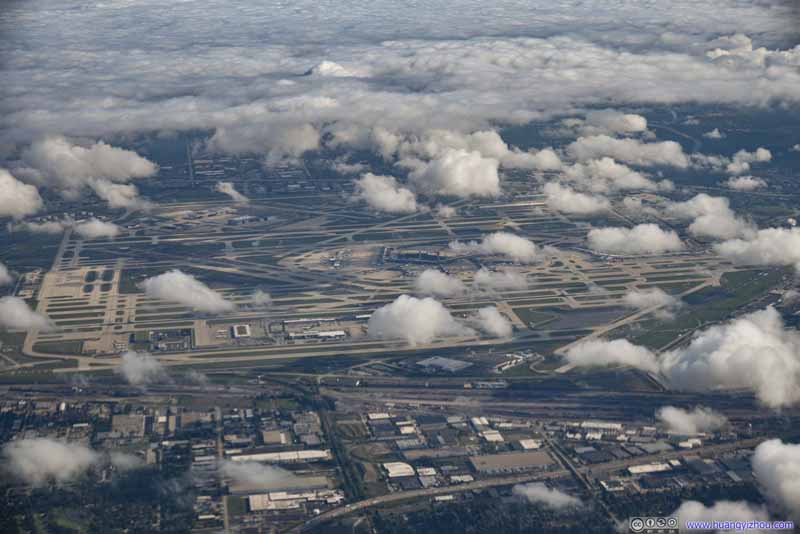 There was quite some history with this ticket. To begin, I had a cash ticket with Frontier to Austin and American’s 5k web special from Laredo for this year’s Bronco and Palomino World Series. Frontier moved its schedule by one day, and American reduced its cash prices to/from Texas at the onset of COVID pandemic, so I cancelled both tickets and bought a cash ticket with American, at the end of April. Just a week later, Pony League announced cancellation of this year’s World Series, so I got left with about 200 dollars of American Airline’s voucher.

Since then I had been thinking about where I could fly with this voucher. The road trip towards the end of last year’s western US trip, when we drove from Glacier National Park to Salt Lake City left quite an impression on me. In particular, I recalled driving along Idaho’s soaring mountain ranges, that were enticingly conspicuous yet unattainably remote from the country road in between them. So sad that I was the person driving, so there weren’t any photos left. Thus I thought, maybe this year the mountains of Idaho would be a good idea.

That’s when I came across a 200-dollar roundtrip ticket with American, and snatched it at the beginning of May. For a week, I would spend a few days hiking in Sawtooth National Forest, before summitting the state’s highest mountain, Borah Peak.

My original itinerary had me connecting in Phoenix for this outbound leg, and Dallas for the return. Luckily, American Airlines fiddled with its schedule (probably due to COVID) and thus, I successfully requested to change both connections to Chicago. It came particularly handy for this leg, as originally my flight would depart DCA at 6:59am, catching which with the first metro train at 5am might be tight. After such a change, my flight to Chicago was at 7:45am, leaving more leeway for things. And with a more direct routing, the new flight actually landed 3 minutes earlier by schedule.

Since this is a cash ticket, and like most sensible people without airline status, I purchased basic economy, which didn’t come with free seat selection (the only consequential difference). After searching some online forums and watching seat map for the previous day, I sort of had an idea of how AA distributed seats for those unwilling to pay. (Note: This applies to single traveler like me, officially the airline would try to seat parties together.)
AA assigned a cash value for every seat on the plane for those with BE willing to pay. And at checkin, AA would assign the seat with lowest cash value, and among the same cash value, from the back of the plane onwards.
Since blue seats at the back of the plane had lower values than green “preferred” seats, they got assigned first. And since middle seats have lower values than aisles and windows, they got assigned first. Using this rule, I timed my checkin and sort of “picked” my seat.

AA113 from Washington DC to Chicago

After some delay in matching a Lyft driver, I only managed to catch the second metro train of the day at 5:20am. I had to say the metro train smelt like disinfectant, which was surprising very refreshing.

There wasn’t too much hassle having my bag checked and getting past security at DCA. 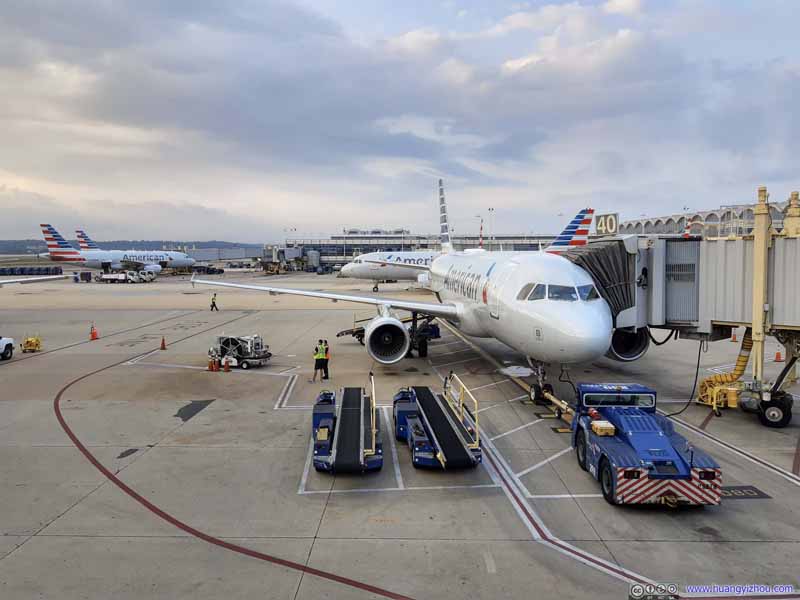 American Airlines A319 (N774XF)At its hub of DCA, my plane to Chicago.

The plane to Chicago was about two-thirds full. With the previous seat assignment algorithm, there were lots of empty seat in the middle of the plane with crowds cramped at the back. The flight attendants asked everyone to board to their assigned seat first, before asking/allowing those in the middle seats by themselves to move to an emptier row. At the end, I believe nobody was sitting next to a person if he/she didn’t wish to.

As for cabin service, due to COVID there wasn’t any. Bagged bottle water and biscuits were handed out by flight attendants upon boarding. But interestingly, of the four flights I took with AA, this was only offered on two mainline flights, not on the other two eagle flights.

Here’s GPS tracking of this flight: 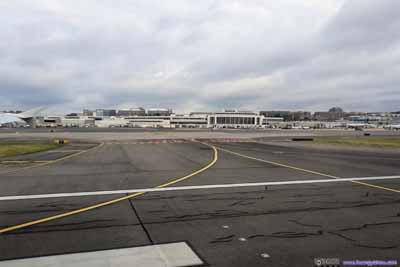 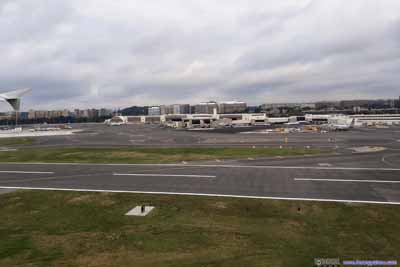 It was a rather cloudy day over Washington DC, with clouds first at 300m and then 2500m. So as expected, I slept most of the way, until the downwind leg, where I took these photos of Chicago’s extensive airport. 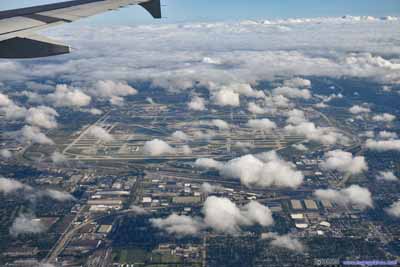 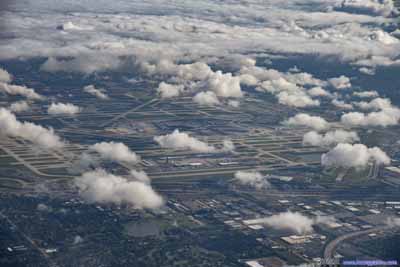 We touched down at 8:30am, which was 30 minutes earlier than schedule, and as expected, the gate wasn’t ready. So we spent some time taxiing around the airport just to kill time (environmentalist would scream at this), and arrived at the gate 15 minutes later. 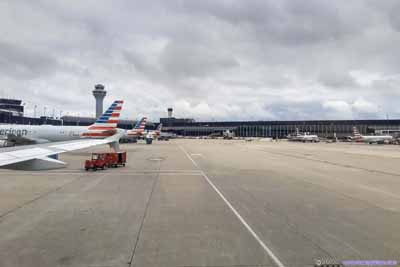 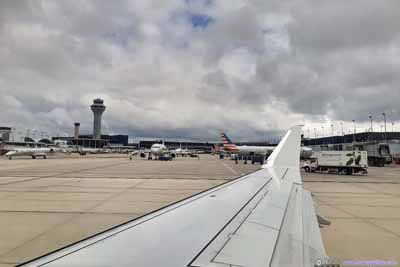 That’s 40 minutes before my connecting flight started boarding, which was just enough time for me to get off the plane, headed for the only Subway store in the airport, bought a sandwich, shoved it down my stomach, and headed for the new gate which was on the other side of the airport. 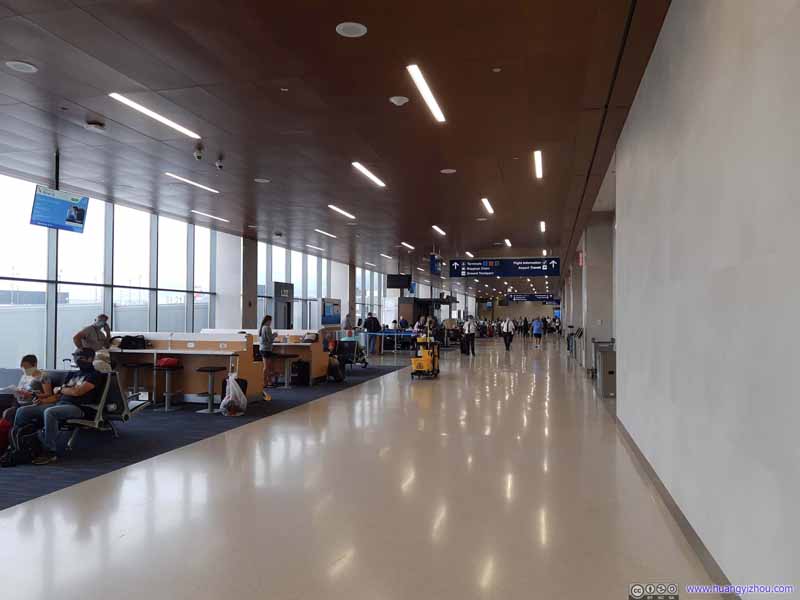 O’Hare Airport L ConcourseFive gates located at the corner of the terminal building, quite some distance to walk to.

AA3300 from Chicago to Boise

It’s an ERJ-175 serving today’s flight. Probably because the plane’s on the smaller side among the ones serving Boise and as AA’s most convenient route funneling people from Northeast to Boise, it’s pretty full.
So it’s rather amazing that I got an entire row to myself, having one of the few empty seats onboard next to me.
Only that the carpet in front of my seat was wet, from either water (fine) or soda (nightmare), resulting in some paranoid moments until I washed my bag tonight. 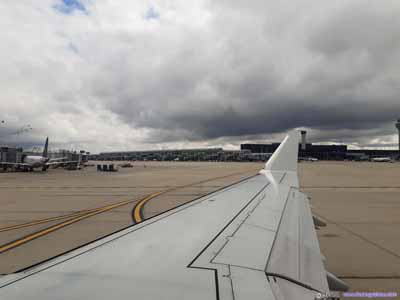 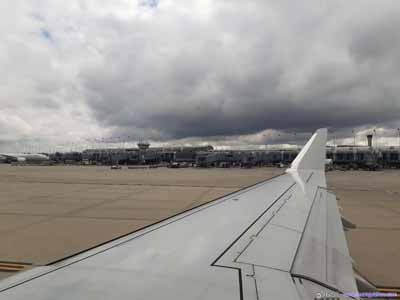 Before taking off, we taxied next to a mostly empty Terminal 1 of O’Hare Airport, used by United. Compared with how busy American’s terminal was, I almost reached the conclusion that American was aggressively bringing back customers (by removing capacity limits a few weeks earlier) while United was actively downsizing. Only that the aerial photo I took 2 hours earlier showed an equally bustling Terminal 1, just United had different wave systems than American.

Here’s GPS tracking of this flight: 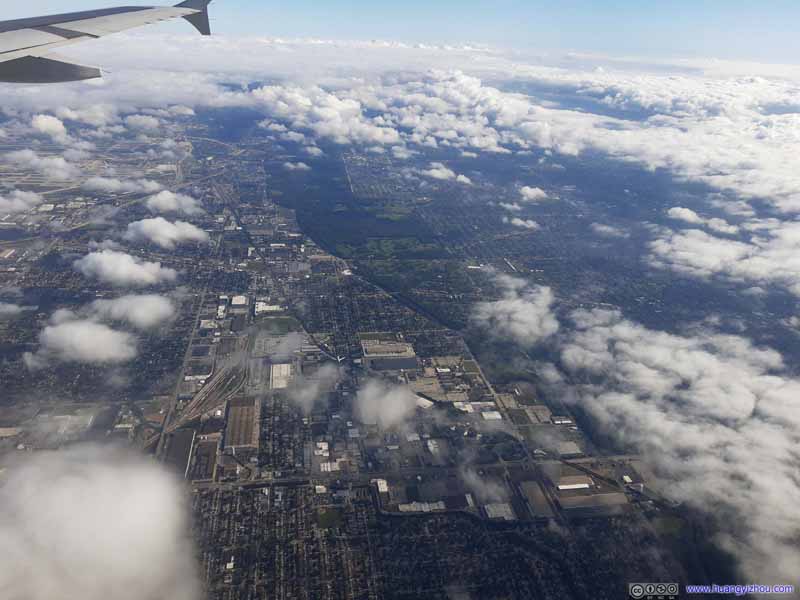 There was cloud cover over Chicago at 1000m, so I spent the first part of the flight watching videos on my phone.

That is, until we reached the realm of midwestern mountains. I was both surprised and delighted to find that we flew right over Grand Teton National Park, which marked the beginning of my trip last summer to the midwestern states. 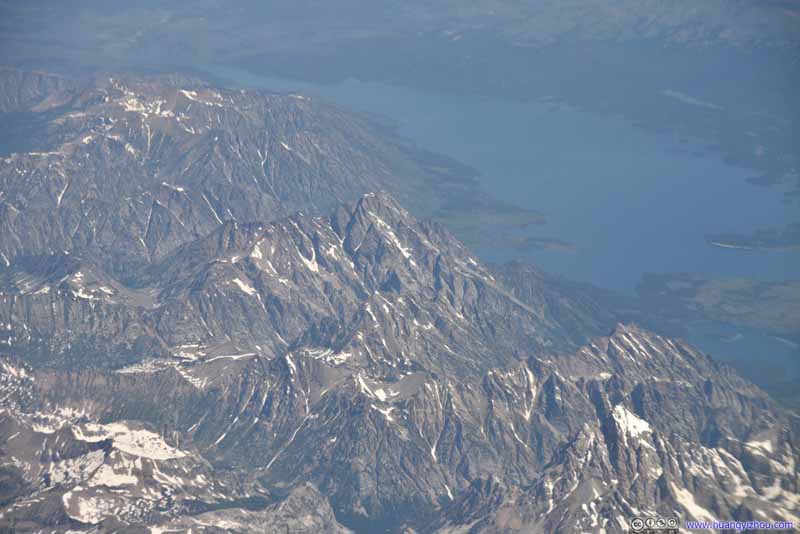 Mt MoranOn the plane I mistook this for the more famous Grand Teton Peak, and I was quite excited. 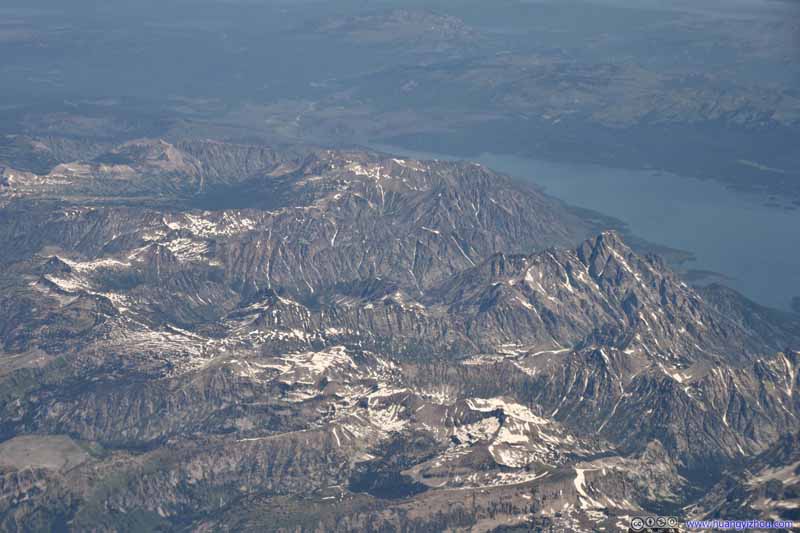 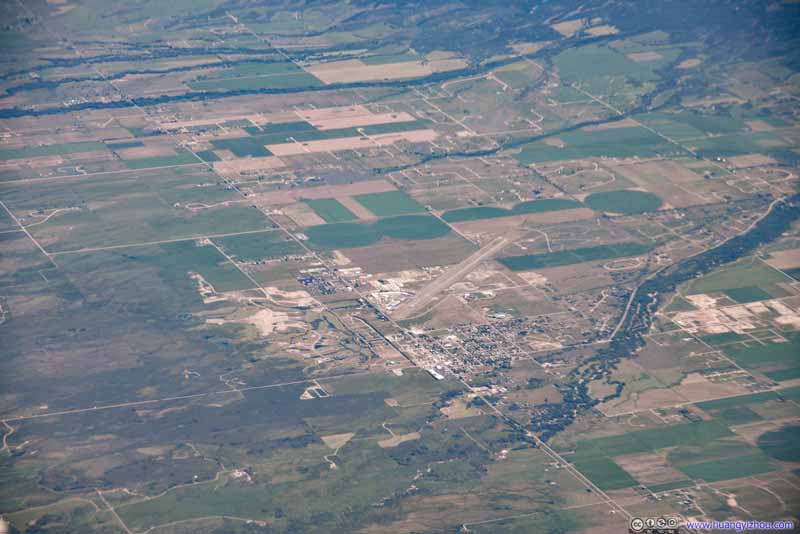 After flying over Idaho Falls, I saw a few mountain ranges, reminiscent of the landscape that I drove through last year. While processing these photos, I was elated that I happened to capture both mountains that I summitted over the week. 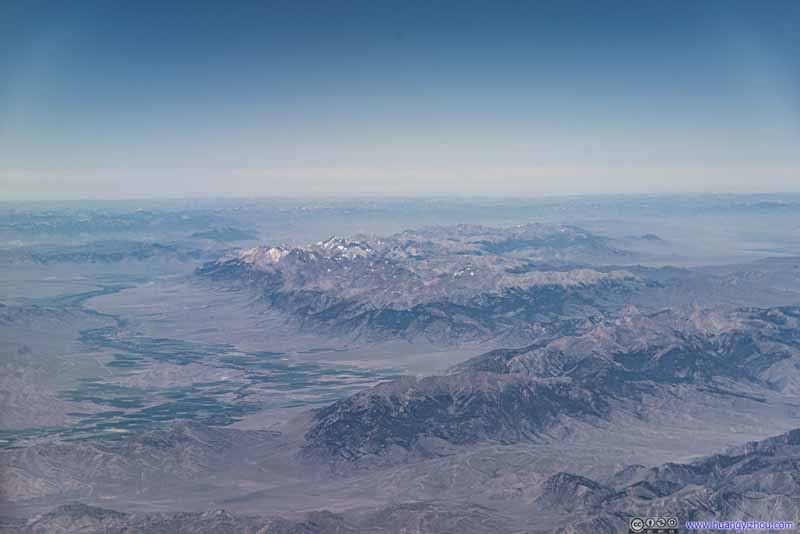 Lost River Mountain RangeBorah Peak as the highest peak in Idaho in the center of this photo. I will summit it towards the end of the trip. 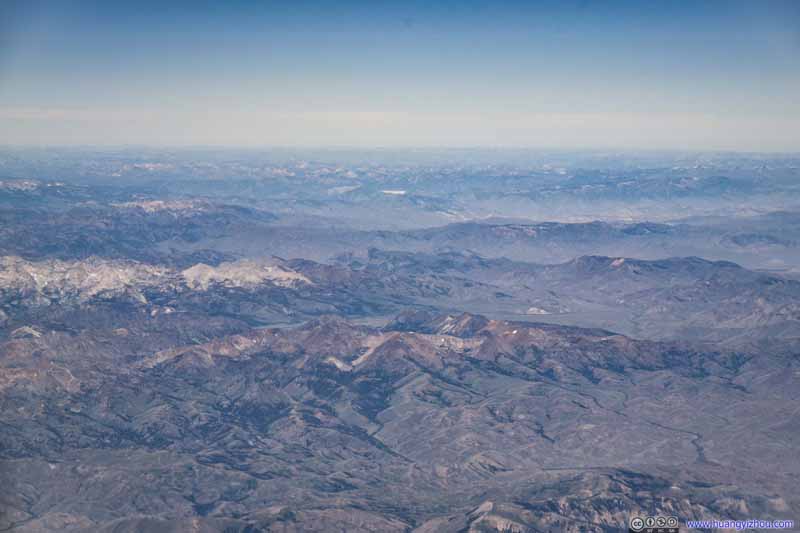 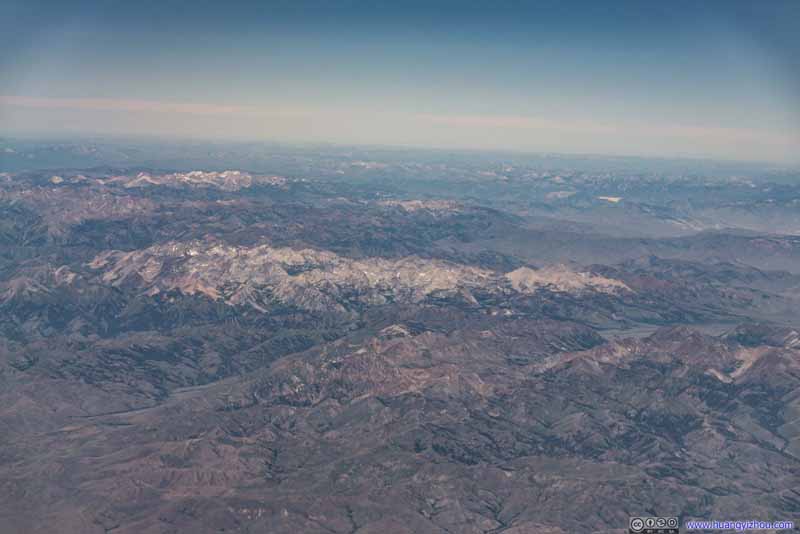 Pioneer MountainsKetchum district of Sawtooth National Forest. Hyndman Peak in the center-left of the photo, which I would be summitting the next day.

Our final approach followed Boise River Canyon, which concluded this scenic tour of southern Idaho. Boise River wasn’t on my original bucket list, but since it looked pretty from above, I paid it a visit on my last day in Boise. 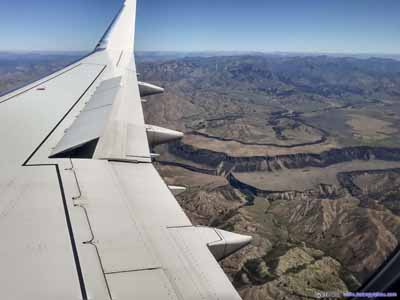 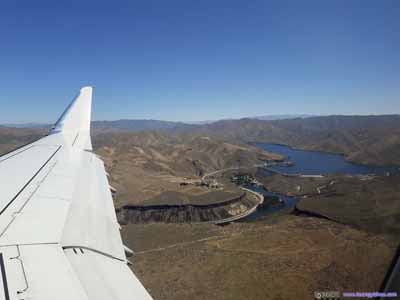 The airport of Boise wasn’t very large, about a dozen gates. So I quickly claimed my bag, and headed for the car rental.
END

Flight Log of American Airlines Flight 113 and 3300 from Washington DC to Boise via Chicago by Huang's Site is licensed under a Creative Commons Attribution-NonCommercial-ShareAlike 4.0 International License.