The last day of my 2020 Lake Tahoe trip as I would be flying back from Reno to Washington DC, with a connection in Los Angeles. 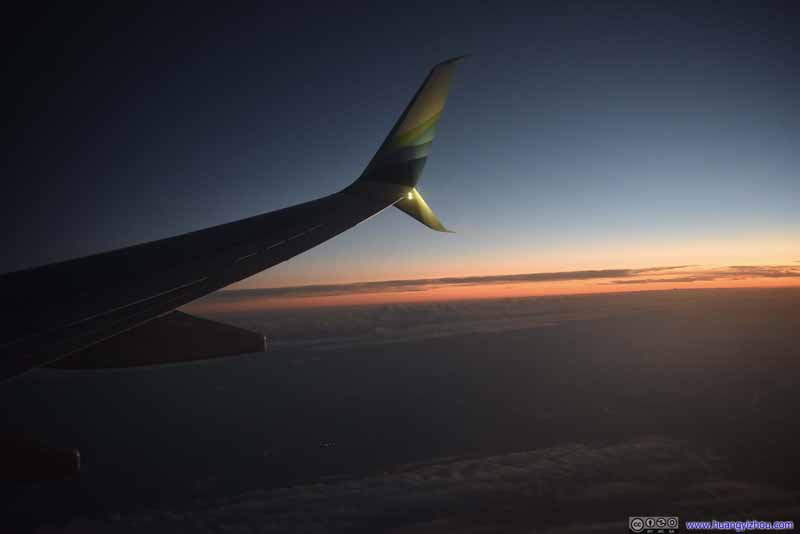 With lots of elite qualification promotions in 2020 from Alaska Airlines, towards the end of it I was one trans-con flight short of their entry-level elite. This largely prompted me to choose Alaska over other carriers for my flight from Reno back to Washington DC, despite their not-so-optimal itinerary with 3.5 hours of layover at Los Angeles. At 140 dollars with taxes, it came out more expensive than the other flights I took in 2020, but it’s nonetheless reasonable given that I only booked about 3 weeks in advance.

My first leg would have me depart from Reno at 8am, which gave me ample time to grab breakfast from the hotel front desk and pack my stuff in the morning, that’s when I found out that Alaska Airlines crew were also staying at Hyatt Place Reno Airport.

After a short drive to the airport garage, I dropped off the rental car for the past week, as the rental workers were beginning their day by clearing off last night’s after-hour returns. They did seem more thorough about cleaning cars than inspecting them.

Flight 2555 from Reno to Los Angeles 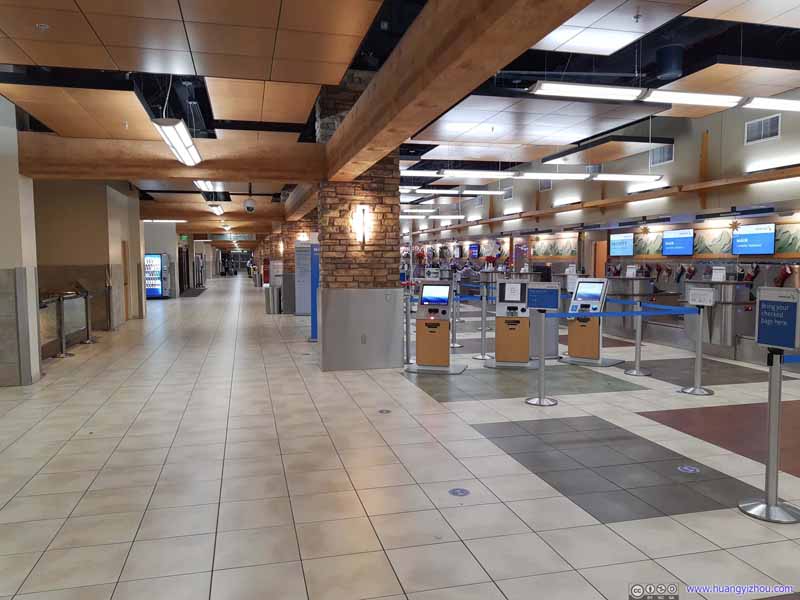 Check-in AreaPretty narrow and not a lot of activities. 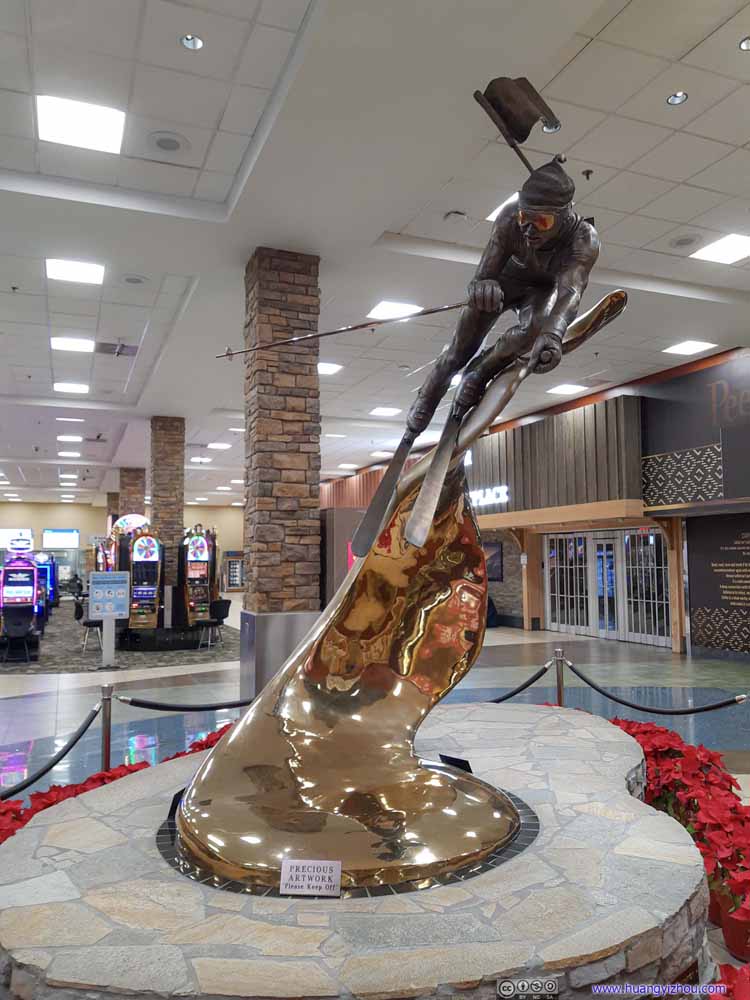 A reminder of the many ski resorts near Lake Tahoe. This could be related to 1960 Winter Olympics that was hosted in the region. 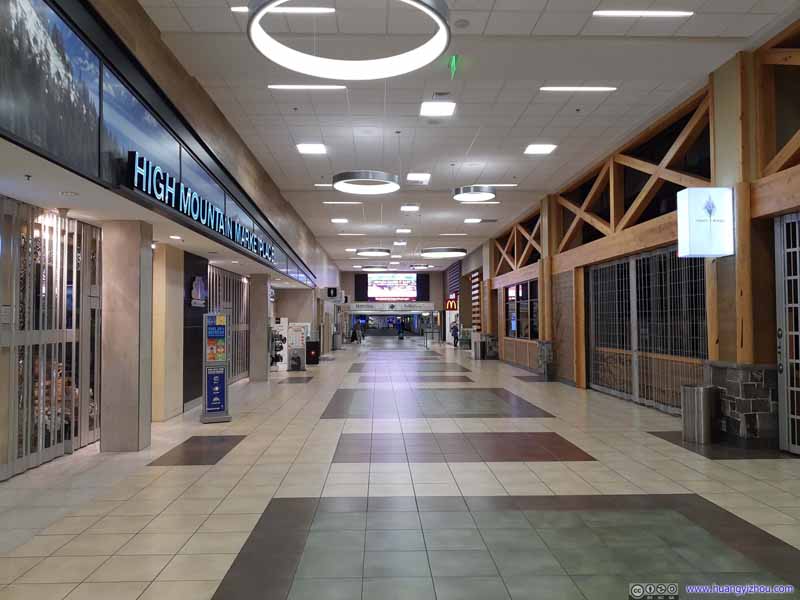 Terminal InteriorToo early for most business to open. 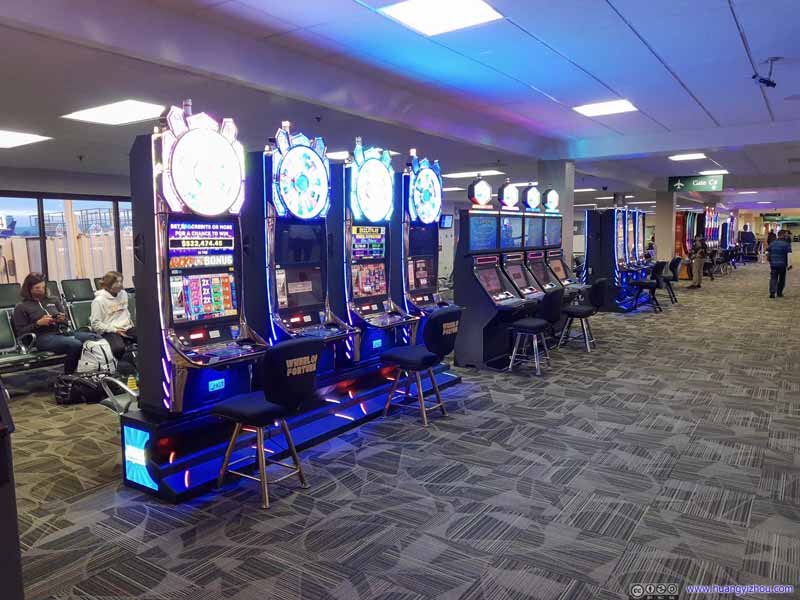 A constant reminder that one was in a legal gambling state. Just that I saw few people actually sitting in front of them playing.

Since I purchased the dirt-cheap “saver” option from Alaska, seat assignment happened at the gate. (One should be able to choose from the back of the plane, but those seats were all occupied when I booked my ticket.) Alaska Airlines wasn’t blocking seats on its regional fleet in December 2020, but the lady at the gate understandably left the seat next me empty since I was by myself.
She did try but fail to revive a broken printer and wrote seat numbers by hand instead. 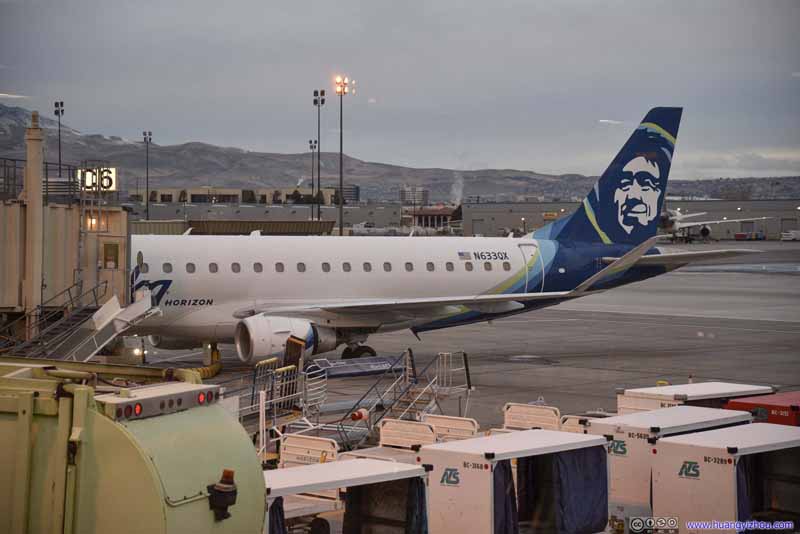 Once onboard, it seemed that Alaska’s E175 didn’t come with moveable head rests (only American had those?), which certainly limited the level of comfort especially on longer flights. 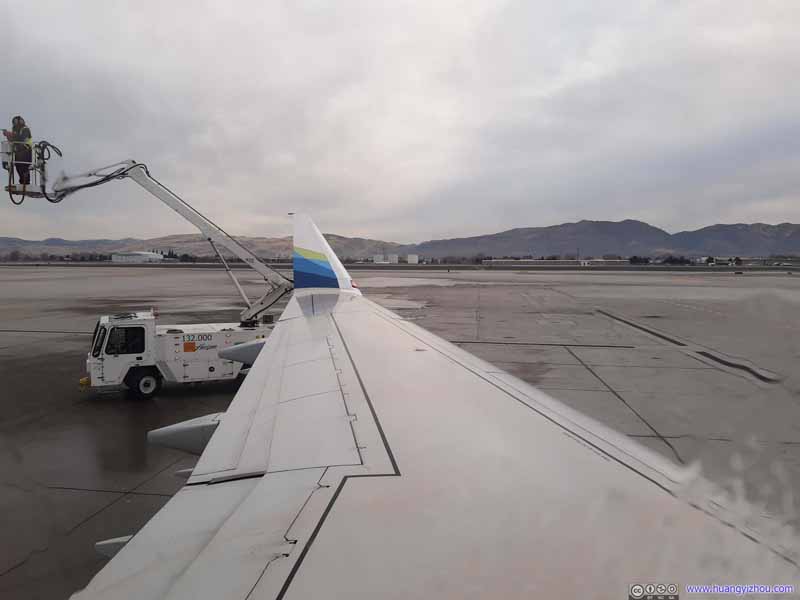 Our captain didn’t feel comfortable about the patches of dew on the wings, so he ordered this process.

And soon after that, we were in the air.
Here’s GPS tracking:

Probably from the remnants of the storm a few days ago, there was cloud cover above 5000m all the way to Los Angeles. So, I only saw signs of civilization during our final approach. 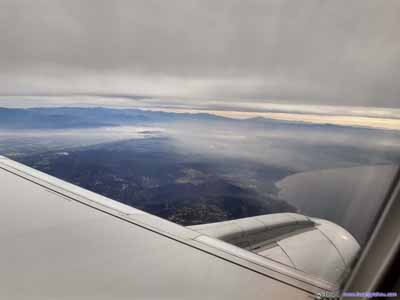 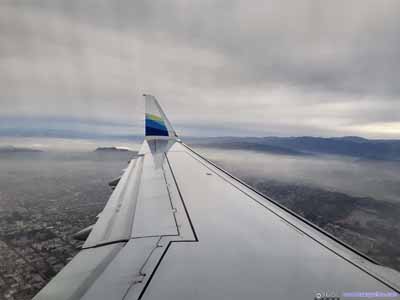 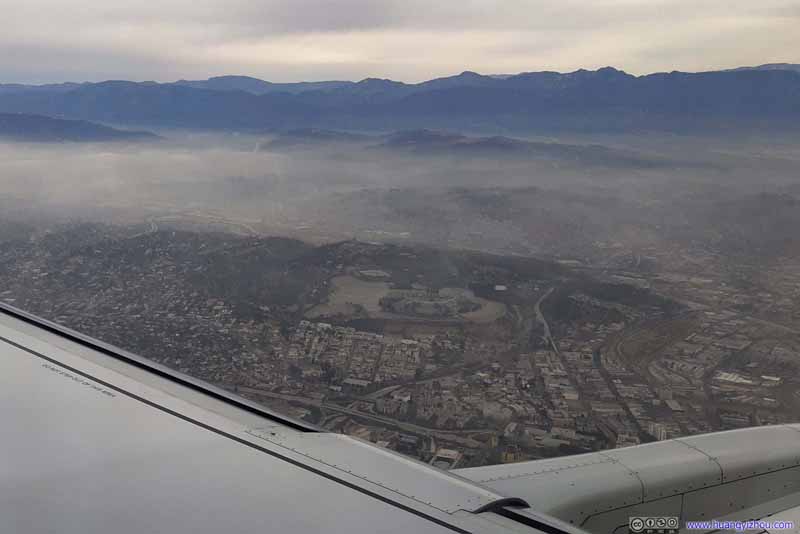 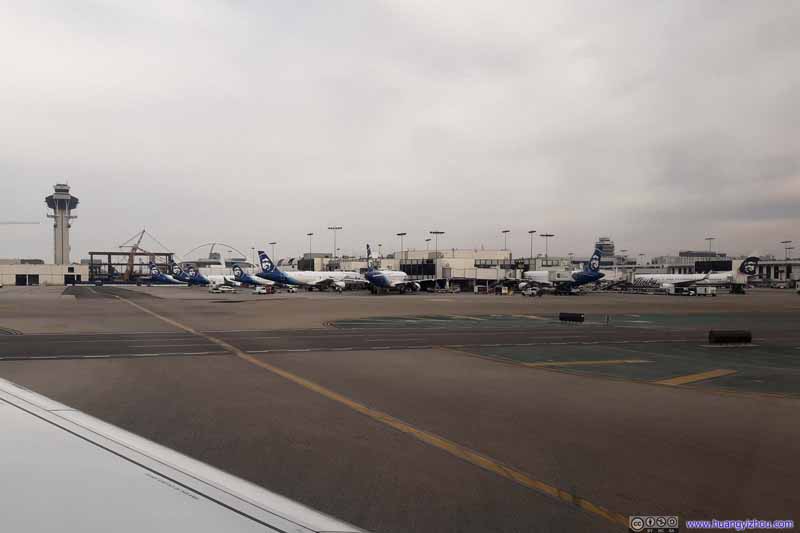 After merging with Virgin America, Alaska had a pretty sizeable presence in LAX, operating an entire terminal 6.

Once in Los Angeles Airport, I had more than 3 hours to kill before my next flight. Alaska’s Terminal 6 was bustling with activities, so I headed over to United’s Terminal 8 which was a lot quieter (to help with social distancing).
It seemed that time flew really fast when I could work on my laptop.

Just before boarding time, I headed back to Alaska’s T6, grabbed lunch from a nearby burger stand, and headed onto the jet bridge.
Since acquiring Virgin America’s A321neo’s, Alaska Airlines had always deployed them on flights to Reagan Washington National Airport. But during the winter of 2020-21, the Los Angeles flight was downgauged to B738, probably due to weak demand as there were only 87 people today out of 147 (coach) seats.

A note about the super-friendly flight attendants for the flight. My suitcase handle was jammed just as I was trying to put it onto the overhead bin. During the 30 seconds I spent to sort it at the back of the plane, one of them offered to find an empty bin somewhere in the cabin (there weren’t many as the boarding was mostly completed) while the other one had been trying to help out the entire time. 30 seconds later I sorted it out with force, and with gratitude towards their helpfulness.

TakeoffTBIT was a lot less busy than what it used to be.

Due to everyone being onboard on time and no queue of planes for runway, we actually took off a remarkable 5 minutes early.
Here’s GPS tracking: 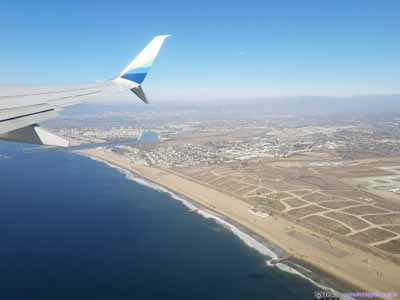 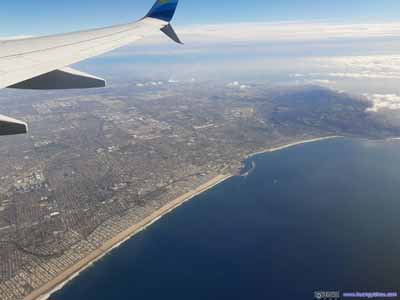 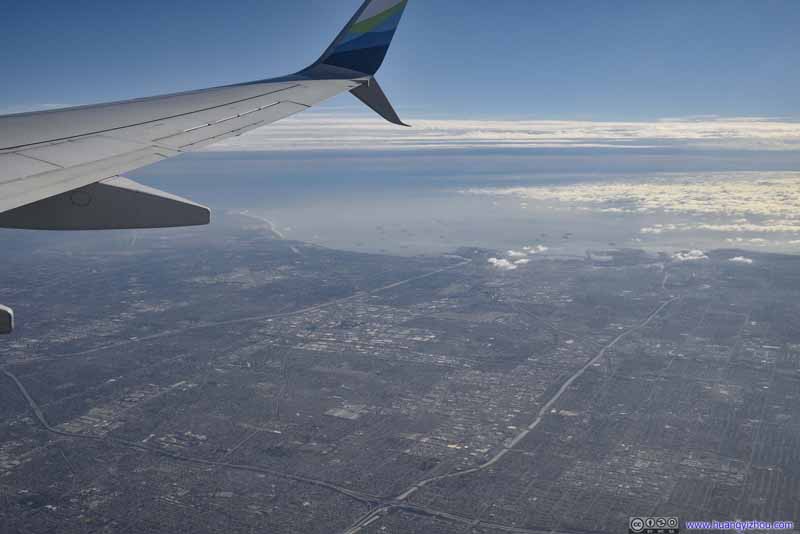 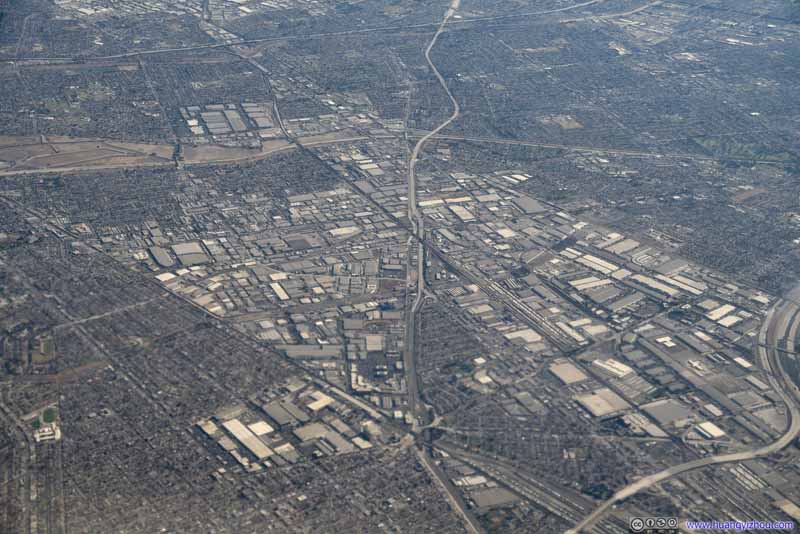 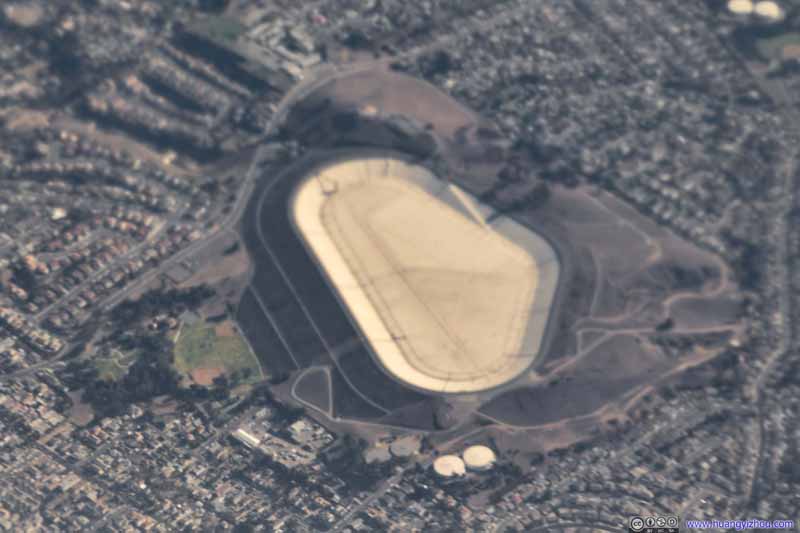 Garvey ReservoirAt first sight this was a racetrack. I still think it’s a pity it didn’t end up that way. 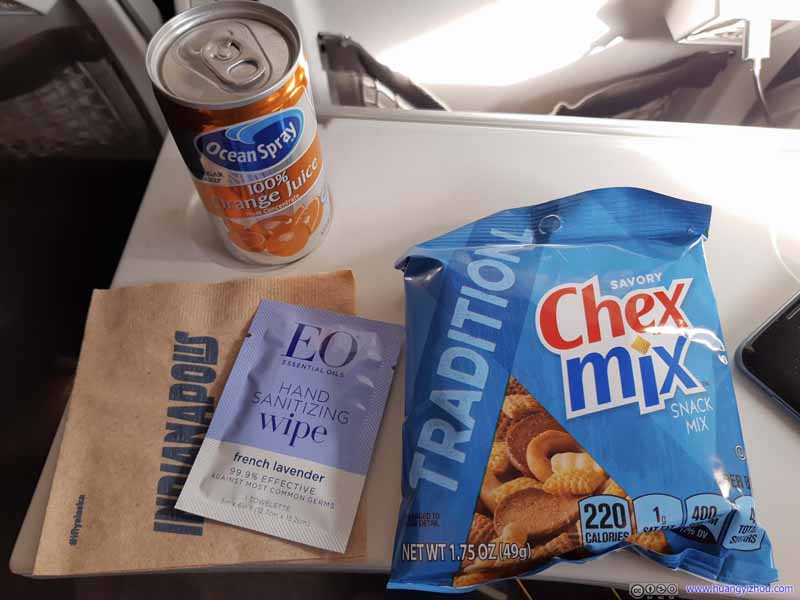 A huge bag of snack, quite appropriate for such a long flight. Alaska seemed much more generous with snacks than other carriers.On another note, I did think sanitizing wipe was better provided upon boarding, not during cruise.

Unfortunately clouds began to cover the landscape just as we were entering Nevada, and that had been the case throughout the scenic part of America’s mountain states. As a result, I didn’t have much to show until our descent in Virginia. 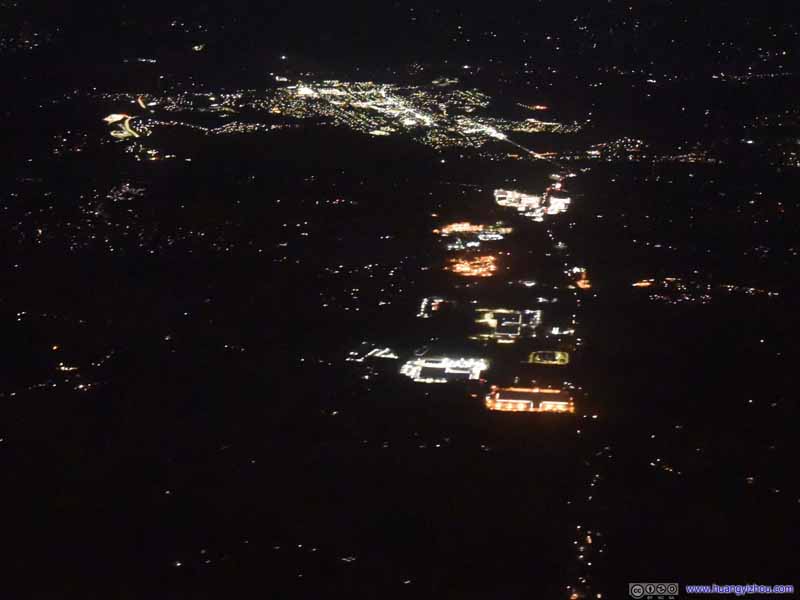 Front Royal, VANorthern gateway to Shenandoah National Park, a town that I frequented. 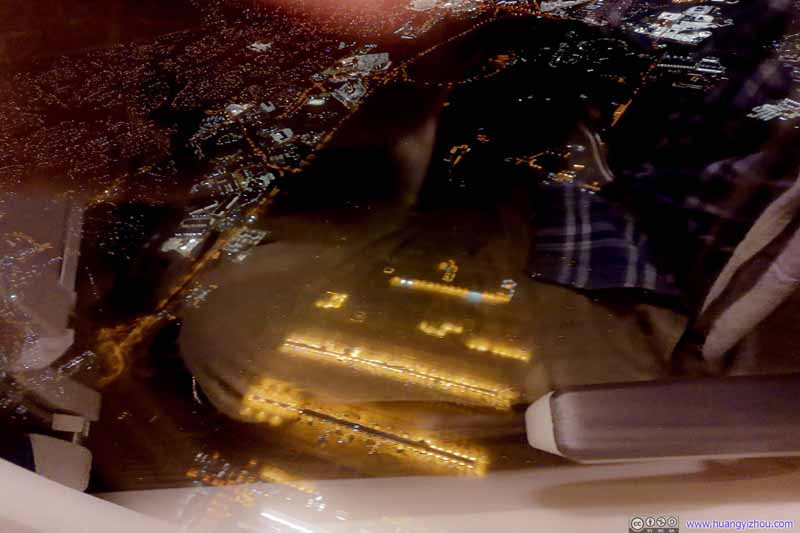 Overflying Dulles AirportReflection from the windows was making my life hard. 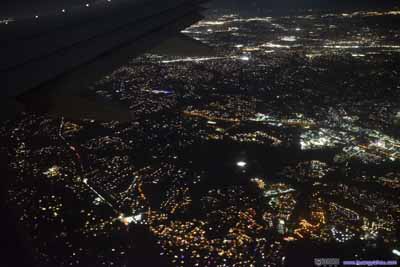 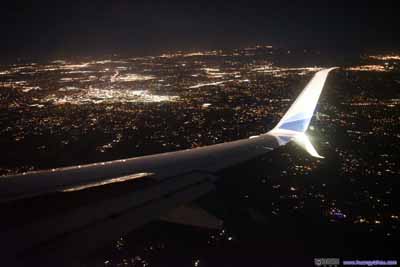 As a note, we landed into DCA from the north via river visual approach, which was always exciting. Here’s a video of the landing:

After arriving at Regan Washington National Airport, Alaska Airline had 20-minute baggage guarantee, which entitled one to either voucher or mileage if his/her checked bag didn’t show up at the belt within 20 minutes of gate arrival. I set my watch and my bag showed up exactly 19 minutes after cabin door was open, which was probably the most upsetting outcome.
That concluded my week-long trip to Lake Tahoe.

Flight Log of Alaska Airlines Flight 2555 and 6 from Reno to Washington DC via Los Angeles by Huang's Site is licensed under a Creative Commons Attribution-NonCommercial-ShareAlike 4.0 International License.