I enjoyed last summer’s trip to Alaska so much that I decided to visit it again this year over Independence Day. The outbound flights followed the same routing as last year, with a different set of sceneries and stories. 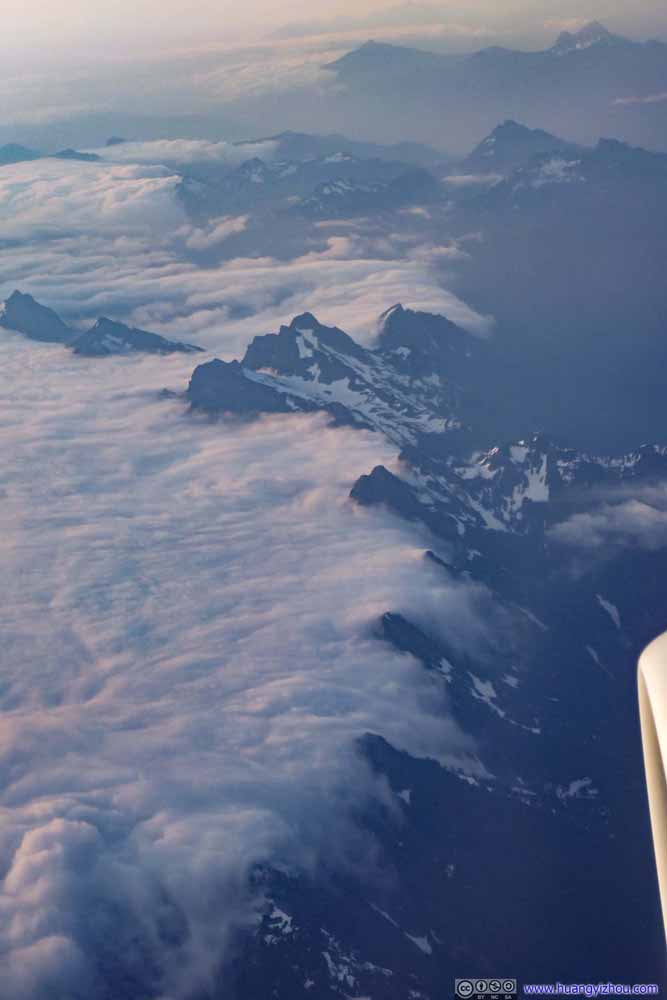 Despite weather not being the most cooperating, last year my friend and I explored a few popular places in Alaska with their most vibrant autumn colors. With COVID and few crowds, it’s probably the best week-long trip I had. In fact, I liked it so much I decided to visit the state again this summer.

With Alaska Airline’s rather generous award stopover policy, I got a set of roundtrip flights to Utqiaġvik, Alaska from Washington Reagan, stopping at Anchorage and Juneau on respective legs.

So for 25k Alaska Airline award miles (plus some nominal fees), I booked myself on 7 flights totaling 9035 miles. I guessed whoever working at revenue control of Alaska Airlines mustn’t be happy with me. This post would be about the first 2 that took me across the entire country from Washington DC to Anchorage.

Flight AS3 from Washington Reagan to Seattle

After wrapping up work on the afternoon of June 30, my friend took me to Fort Totten Metro Station. (Metro green line terminated there during 2021 summer for platform maintenance.) I decided to wear trousers to fit the Alaska climate, which meant it’s quite a workout for me to navigate around the metro station with my two bags. And by the time I reached the platform, I was sweating heavily.

Luckily, the metro train was punctual, and I timed my departure perfectly so that I sat at the gate for ~7 minutes before boarding time.
Reagan National Airport’s Terminal B had long been my favorite, for its modern views of National Mall and short security lines. (It’s tenants, Delta, United and Alaska, didn’t have as many flights from the airport as American Airlines which occupied terminal C.) This time, the TSA precheck line was even longer than the general line for security checks. 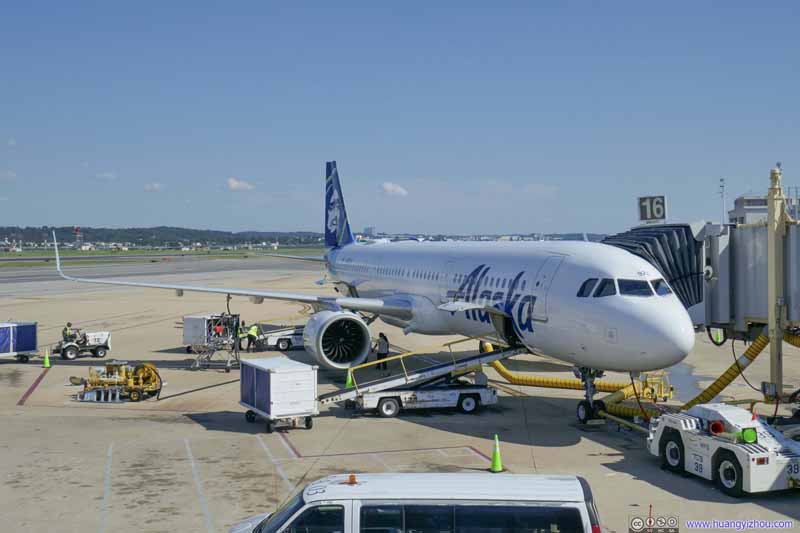 It’s a full flight as many families were heading out of town for July 4th celebrations. That meant the gate agents were busy shuffling seats around so groups could be seated together. Unfortunately that included mine as I was moved to the right side of the plane facing the sun. Neither did it add to my pleasure that I did a much better cleaning of the seats with my personal wipes than the best of cleaning practices as advertised by the airline.
Adding to the operational hiccups for the day, which were many to come, our push back was delayed for 15+ minutes because “weight and balance information not available”.

Once airborne, we took a huge detour into northern Tennessee to avoid some weather system between Kentucky and West Virginia, that meant thick clouds outside for the beginning part of the trip.

Even after we cleared the weather system, it was still mostly hazy outside as we were traveling through the midwestern states, which wasn’t good conditions for photography. This, however, improved a bit as we were heading into Montana.

As for cabin service, the cabin crew performed two rounds of drink services in coach, one after takeoff and the other an hour before landing. That’s certainly not the norm for Alaska’s trans-continental flights. Maybe the plane just carried too many drinks today?

Then, I ran into the spectacular views of Cascade Mountains. The battle between the cloud’s elasticity and the mountain’s fortitude was certainly a sight to behold.

Then it’s the final descent into Seattle Airport. 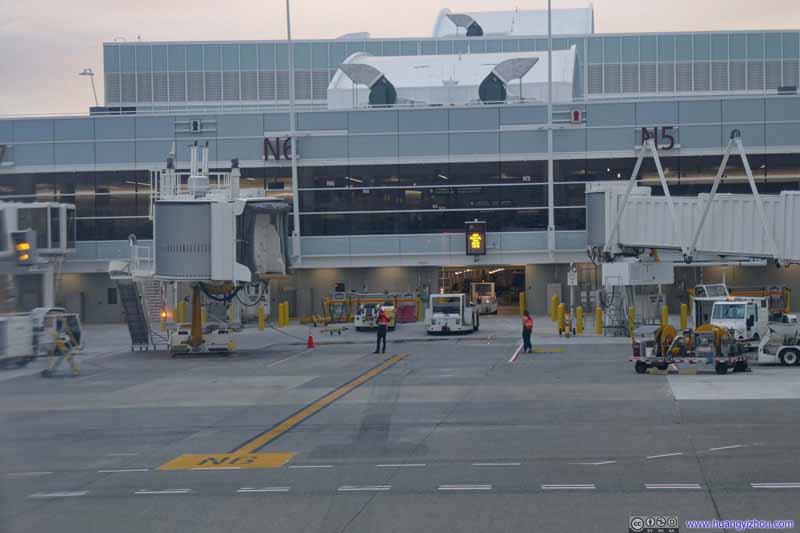 Originally this was the gate prepared for us. The digital screen in the center of this photo had our flight number too. But we stayed parked for some time before moving on to another gate, as our captain told us “this gate couldn’t accommodate A321”. Well, for that, I expect better coordination beforehand.

After our little adventure with finding the right-sized gate, our gate arrival was 11 minutes late, which left me less than 20 minutes before my next flight’s boarding time. But I was in no rush as the inbound plane for my next flight AS127 was predictably delayed. (A quick check on flight tracking websites revealed that late night flights from Seattle to Anchorage were often delayed by 30 minutes or more recently.)

Flight AS127 from Seattle to Anchorage

A gate switch announcement (C9/C3) was made on 9:17pm, due to “improper parking” as the gate agent frankly put it, which triggered a massive exodus in the terminal. I could try to take it fatalistically, as I was the bad parking mascot for the day; or realistically, that meant Alaska Airlines just couldn’t put its operations together even at hub. 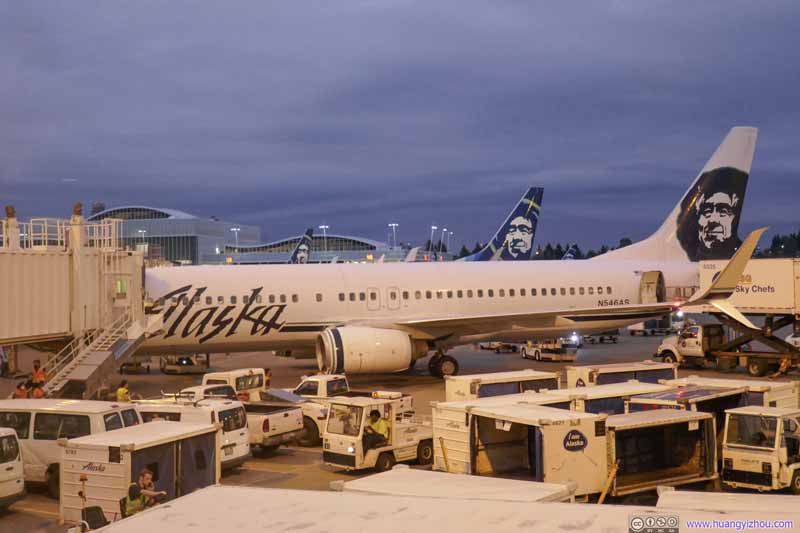 Throughout this trip, all 7 flights turned out to be pretty full as people seemed eager to vacation with vaccination expanding and covid cases dropping (as of June-July 2021). That meant despite me being Alaska Airlines entry-level elite, this late-night flight was the only one of 7 flights where I got upgraded to premium class (I did take a lot of exit row seats for the rest though, when there were only middle seats left in premium class). While for “premium class”, which was Alaska’s way of calling “economy with extra leg room”, the additional legroom was pretty visible. Yet I didn’t feel any additional recline, which didn’t make sense to me as this wasted some of the additional leg room.

While the rest of the plane was boarding, I chatted with the lady next-seat, from Austin and born in Sri Lanka, about the various adventures she had had. Otherwise, waiting for Alaska Airlines to put its operations together and get us underway would seem like a wait into eternity.

And when we were finally underway, it’s mostly undercast with scattered clouds beneath us along the northwest coast of North America. 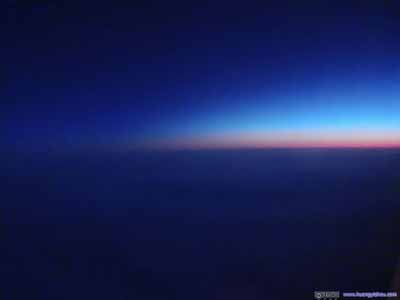 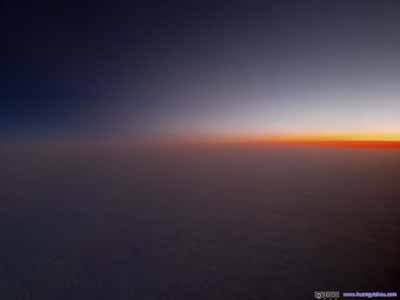 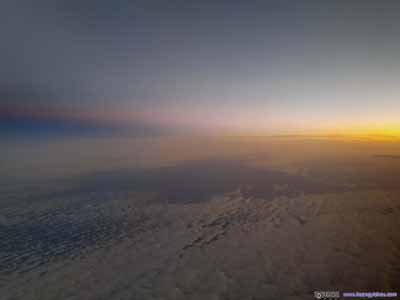 It’s a surreal experience. We left Seattle in the dark. As we flew north, I witnessed the distant horizon lighting up as if in preparation for sunrise. It felt like the alluring radiant from the realm of north was welcoming me into its territory. While the sun never rose above the horizon, it’s getting brighter enough for me to see the extensive glaciers as we flew into Alaska.

The clouds cleared as we entered Prince William Sound, giving me a front-row view of the extensive glaciers and islands beneath us. Illuminated by the soft twilight, it’s a sight both exciting and soothing. It’s just that twilight turned out to be too dark for my newly-acquired compact camera, so I had to perform a lot of noise reduction during post processing.

Our approach path into Anchorage overflew Turnagain Arm, thus I was given the tour of mountains to its south getting lower in elevation and less in snowpack. This tour concluded with contours of distant mountains to the west and north, most notably Denali as North America’s highest mountain, before we touched down in Anchorage.

After landing, I amazingly found that the one-month mobile plan I got from RedPocket worked on the first attempt. I used a MVNO under T-Mobile, which meant last year I had no coverage at all in Alaska. This time, I got a MVNO plan under At&T, which worked great.
So after retrieving my checked bags, it’s a Lyft ride to my overnight hotel as I concluded this very long day.
END

Flight Log of Alaska Airlines Flight 3 and 127 from Washington DC to Anchorage via Seattle by Huang's Site is licensed under a Creative Commons Attribution-NonCommercial-ShareAlike 4.0 International License.