Flight Log from Phoenix to Baltimore via Detroit, with Spirit and Southwest

January 2022. After spending a week sightseeing in Arizona, among its saguaros, red rocks and Grand Canyon, this is the inbound flight segments where I flew Spirit Airlines and Southwest Airlines from Phoenix back to Baltimore via Detroit. 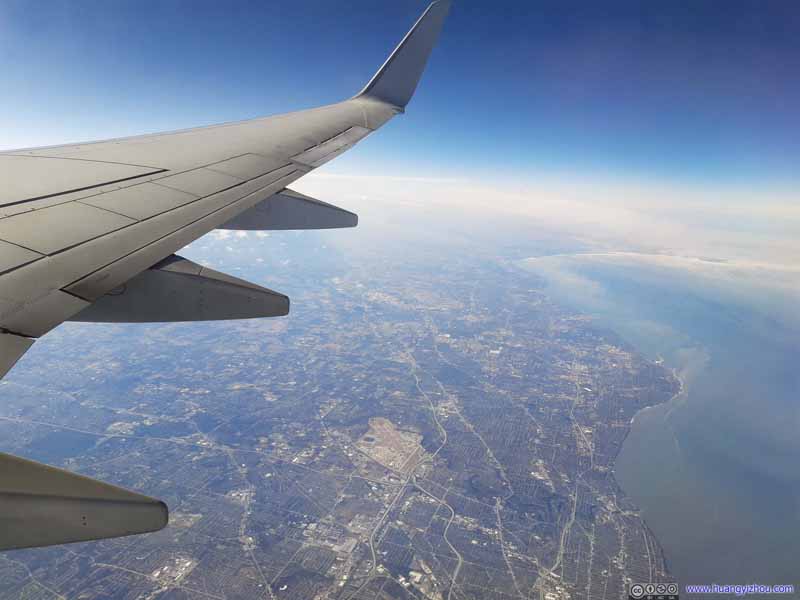 Flight NK1491 from Phoenix to Detroit

There weren’t that many great options flying from Phoenix to the east coast. It’s either getting up super early, getting home super later, or redeye. Further complicating matters were that my friend would be heading to Detroit and I to Washington DC.
That’s when we came across Spirit Airlines flight 1491, which would depart Phoenix at 10:45pm on Saturday, Jan 15, and arrive in Detroit next morning at 4:24am. It seemed a perfect match for my friend heading to Detroit, and for me, I would hop on a morning flight on American Airlines at 6:10am, arriving in Washington Reagan at 7:50am. Given that the Spirit Airlines flight was only 31 dollars (plus $33 for a checked bag), everything seemed perfect.
Furthermore, since I was OneWorld Ruby, I could same-day standby on other American Airline flights in case I didn’t make the not-too-tight connection. To prepare for the worst case scenario all AA flights were full for the day, I brought myself another ticket on Southwest that would depart for Baltimore at 6:40pm in the evening. Anyways, with such a bulletproof plan, getting home on Sunday Jan 16 seemed like a sure thing to me.

Probably because this set of flights was too perfect, despite they being on separate tickets, I didn’t research them as thoroughly when I bought them. Not until a few weeks after the purchase did I start to spot the issues.

Long story short, my conclusion was that Spirit Airlines engaged in a business practice that, despite perfectly legal, was very dishonest:

On every other day of the week, the plane would be making a day-time roundtrip between Detroit and Phoenix, except for Saturday, where the plane would be flying Detroit-Phoenix-LaGuardia-Phoenix-Detroit, taking advantage of LaGuardia’s lack of perimeter rule on Saturday. However, Spirit Airlines set its schedule so tight, that the slightest mishap earlier in the day would delay the final redeye leg of Phoenix-Detroit. Adding to the issue, Spirit Airlines was very gate-constrained in both Phoenix and LaGuardia, meaning the delays would spread like dominos as planes wait for available gates in case something goes wrong.
While tight scheduling could be argued as benign, Spirit Airlines engaged in the rather dishonest practice, of changing the flight number of Saturday night’s Phoenix-Detroit flight every few weeks, so that flight tracking and ticketing websites would have no knowledge of its on-time performance. It’s like they knew this scheduling couldn’t work, but instead of going to a more realistic scheduling, they did their best concealing it, hoping customers wouldn’t find out.

In the end, Spirit Airlines sent out multiple notifications throughout the day that our flight couldn’t make it on time, and after weeks of watching its performance, I wasn’t surprised. (The first flight of the day, Detroit-Phoenix, was terribly delayed.)

Spirit Airlines did go to the extreme of cost-cutting by having only one check-in agent for the night. Unfortunately, I was second in line behind a group of people that had some rather technical issues to sort out. But probably as a goodwill for my wait, the gentleman let my slightly-overweight checked bag through. I wasn’t fan of Spirit’s 40lbs checked bag allowance, which was unfortunately picked up by the other ULCC Frontier. 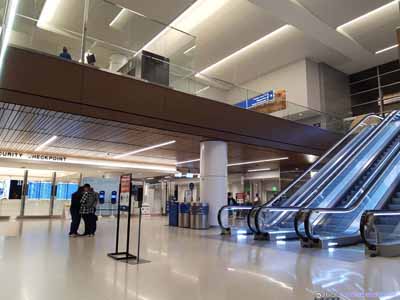 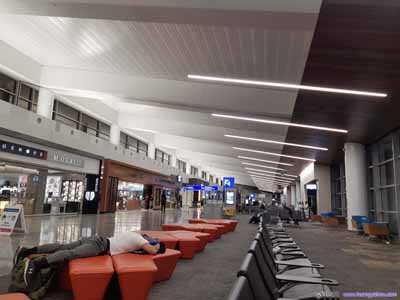 Interior, pre (left) and post (right) security, one of the few airports in United States whose interior felt modern.

Once past security, I liked the fact that PHX’s Terminal 3 was modern with high ceilings and ample power outlets, a far cry from America’s dated Terminal 4. Despite the airport could certainly use more janitor crew for its upkeep.
That’s when I learned the cruel fact that Spirit Airlines only had one gate in PHX. After our flight to Detroit, the gate was scheduled for another flight from Dallas, which was on time. While in the airport, I was on flight tracking website watching the two planes racing towards Phoenix, and they landed almost the same time.

Our plane (N502NK, left), which arrived more than 1.5 hours late from New York La Guardia, and another plane (N606NK, right), which arrived on time from Dallas, was battling for the only gate that Spirit Airlines used in Phoenix Sky Harbor Airport. 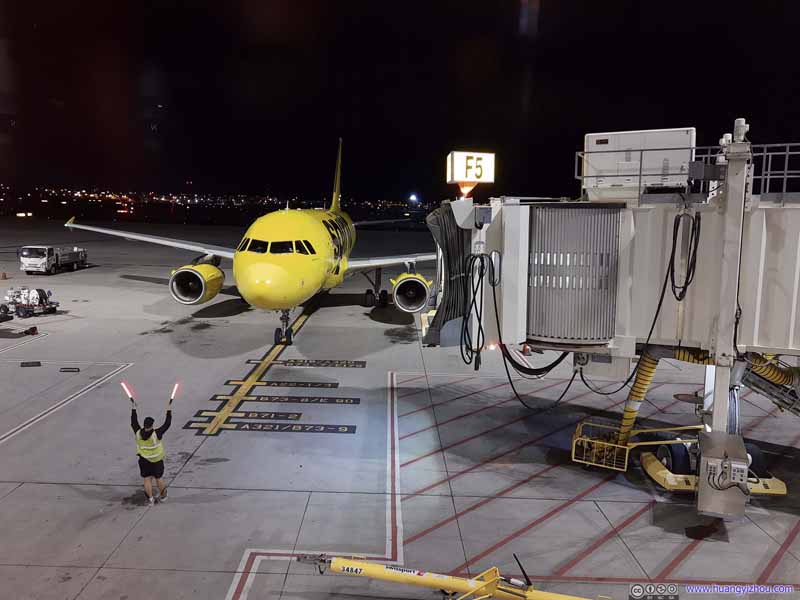 In the end my plane (N502NK) prevailed, probably because it still had one leg left for the day, while the other plane (N606NK) would spend the night in Phoenix.

As a result, the other plane (N606NK) from Dallas waited on the tarmac for about an hour as our plane (N502NK) turned around. I felt bad for the people from Dallas, that everything except the last hundred meters went smoothly for their day.

As for the flight itself, I ended up in a middle seat and was trying to catch some sleep, so there wasn’t anything to talk about.

Flight WN1184 from Detroit to Phoenix

Just as I boarded flight NK1491 in Phoenix, I knew I couldn’t make it onto my connecting flight that would depart at 6:10am in Detroit. To make matters worse, a snowstorm was reaching Washington DC area, where most of the flights later in the day were canceled, that included all the remaining flights by American Airlines. There it went my hopes of getting on standby.
In addition, the backup of my backup plan, Southwest’s 6:40pm flight to Baltimore was also canceled. But luckily, Southwest had another flight WN1184 that would depart for Baltimore at noon with a few seats left. So I changed myself onto that flight, hoping to beat the storm back home.

After saying goodbye to my friend, I cleared security and entered Detroit’s north terminal for a fourth time. To brighten up my mood, the flight would be operated by Southwest’s “Louisiana One” special livery plane. 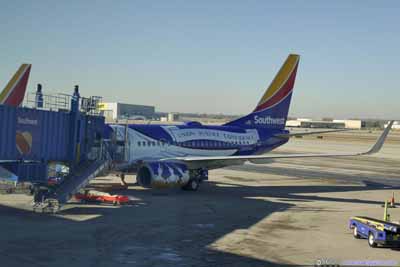 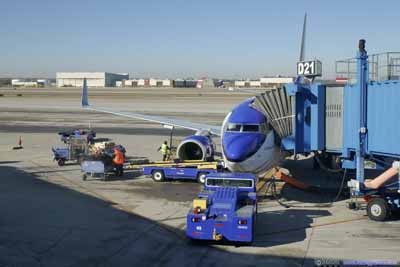 With a few flights to Baltimore later in the day canceled, I was expecting a pretty full flight, instead I got an empty middle seat next to me. In addition, the tray table wasn’t clean with remnants of biscuits. I guess the cleaning crew were rushing to beat the storm too.

Our captain informed us that the entire flight would be bumpy, not unexpected with the storm. As a result, there was no cabin service.
Here were a few sights along the way.

Once on the ground, we waited 2 minutes for a ground guide (disappointed given Southwest’s hub at Baltimore) before pulling into the gate. I retrieved my checked bag 23 minutes after gate arrival. I was spoiled by Alaska Airlines 20-minute baggage guarantee, so that wasn’t ideal.
But the important thing was, I beat the storm on my way home. Snowflakes started to fly as my friend drove me home from Baltimore, and not long after I got home, I saw the yard covered in snow. For that aspect, it’s a great finish for my Arizona trip.
END

Flight Log from Phoenix to Baltimore via Detroit, with Spirit and Southwest by Huang's Site is licensed under a Creative Commons Attribution-NonCommercial-ShareAlike 4.0 International License.