My flights back home to Washington DC after meeting some friends in Los Angeles, with untimely weather causing a diversion and some not-too-pleasant experiences. 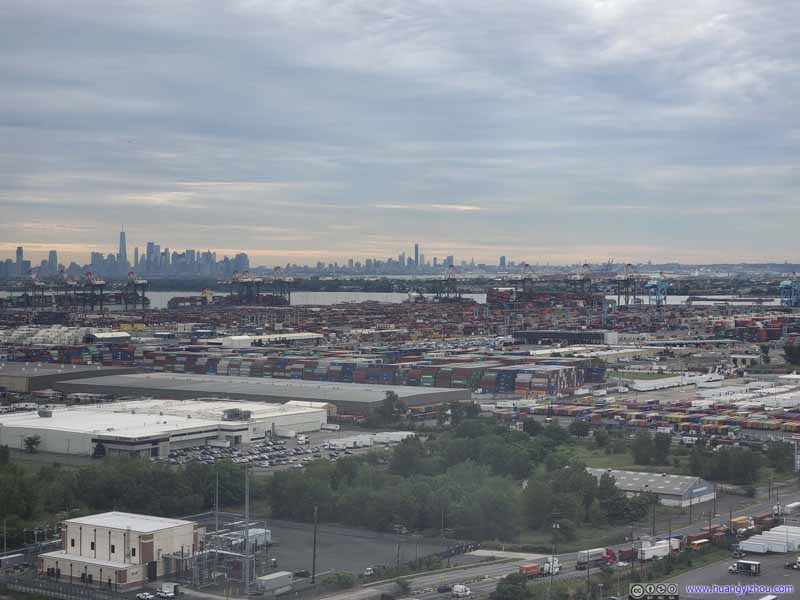 After some parties featuring switch, pokers and arcade, I concluded my weekend of reunion in Los Angeles, and was ready to fly back to the east coast in the evening of Monday June 13.

The 3-hour connection felt a bit long to me, especially after a red-eye. But AA4710 was the first flight of the day between Philadelphia and Reagan, so I didn’t have better choices. I would share the first leg AA981 with a friend of mine bound for Pittsburgh, so at least we would have companion, or that’s what I hoped.

The misery of the day actually began with the rental car shuttle going through an anarchic arrival floor of Los Angeles Airport at 9pm, most likely due to many drivers trying to wait for pickup at the arrival floor (instead of using the cell phone lot). It took a bewildering 20 minutes for the shuttle to navigate from Southwest’s T1 to America’s T5. The driver did advise United and Alaska passengers to get off at T1 and walk across the airport, if they were in a hurry. Suddenly, LAX’s tram project started to make sense to me.

Once inside the terminal, American Airlines’ priority line was actually longer than the standard line, I guessed that’s another sign of the times. (which I didn’t have to use if they would recognize my AS status and allowed free self-tagged bags.)
Once onboard, I found the flight was pretty full, thus boarding took longer than usual. But after that, everything appeared to be going smoothly.

Since it’s a red-eye flight, I spent most of the flight (trying to) sleep. It’s a few days from summer solstice so dawn actually broke out a lot earlier than expected. The distance horizons were lit up as we flew across The Mississippi River.

However, just as we were approaching Philadelphia Airport, we took a turn back and headed towards the Atlantic Ocean. Later we were informed there was a storm along the airport’s approach route, so we entered a holding pattern over the Atlantic Ocean. The hold lasted about 20 minutes, before the captain decided we were low on fuel and had to divert to Newark. 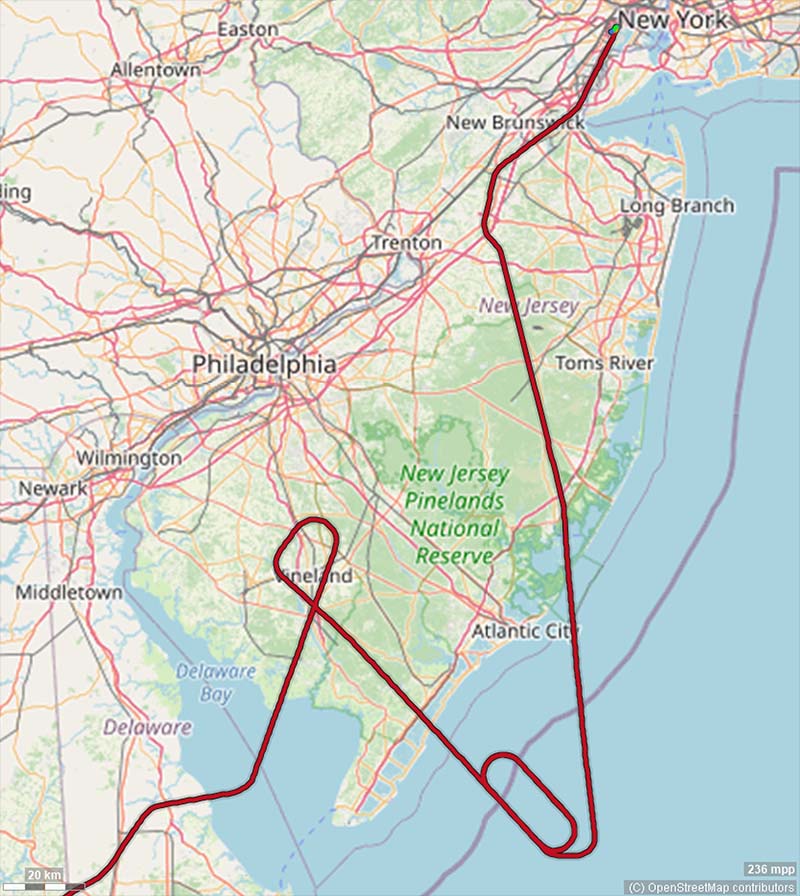 So we landed at Newark just before 9am and pulled into a gate not long after that. Meanwhile, the first officer reached his maximum duty time (the ground manager said “had been working since 5pm Los Angeles time”), thus the crew could no longer fly us to Philadelphia (despite some fellow passengers recalled their friends in Philadelphia “the rain only fell for a brief period”). 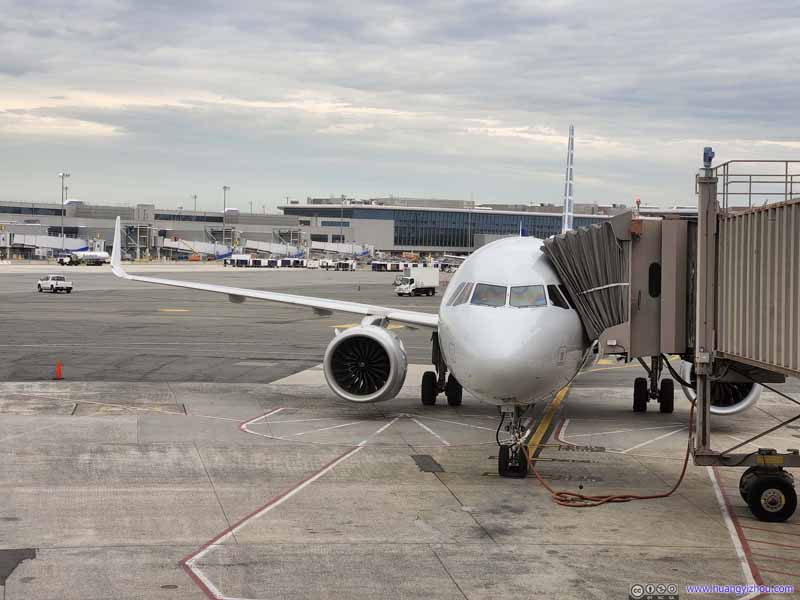 Newark was not a hub for American Airlines so it’s tricky to get this plane back into service. It ended up staying in the airport for an entire day before being ferried to Philadelphia later at night.

Newark was not a hub for American Airlines so replacement crew was unlikely to be found. The ground manager ushered us out of the terminal where they would try to accomodate us at the checkin counter.
At the checkin counter, which wasn’t very well-staffed to begin with (typical for the summer of 2022), there was only one agent available to process the reaccomodation of a planeful of tired people so the lines were predictably long. I was a bit shocked that the ground manager was asking people one-by-one about their final destinations, I thought in the year 2022 American Airlines should have decent IT to handle that automatically.

Initially, the plan was for American Airlines to charter a bus that would send Philadelphia-bound passengers to Philadelphia, while for trying to accomodate connecting passengers from Newark. Since Newark wasn’t a hub for American Airlines, and probably the ticket agent soon realized there weren’t enough availability for flights from Newark that day (or she got tired at handling a planeful of people so this would send them out of her way), they soon encouraged everyone to get on that bus to Philadelphia, where American Airlines operated more flights. The chartered bus didn’t arrive until 11am, and with that my friend and I decided to get on that bus.

I should say I did have the option to take Amtrak from Newark Airport back home, yet at the scene American Airlines was very persistent that any out-of-pocket expenses must be submitted to their customer care department, which would later get reviewed and “possibly” reimbursed. They stressed there was no guarantee they would provide any additional compensation for the likes of Uber, bus or Amtrak. Given that the diversion was caused by weather, and previously I had an unpleasant experience with American Airlines’ customer care with their horrendously long response time, I left that as a last resort.

So two hours later, we arrived at Philadelphia Airport at around 1pm, not in a good shape with little rest since last night. The checkin agent informed me that direct flights to Washington Reagan were fully booked for the next two days, and they could only put me on standby for AA4910 which would depart at 3:40pm. At that time, I had the option for a confirmed seat on some connecting flights back to Washington Reagan, which the agent first said there weren’t, until I showed them the search results on my cell phone. In my opinion it’s not a professional move. On this note, the customer service desk past security was much better, despite being located a bit out of the way. The connecting flights would depart around 4pm. so my plan was to grab a confirmed seat on the connecting flights, and standby for the direct flight at the same time. In case I didn’t make the standby, I would probably have to run around the terminal for the confirmed connecting flights. A few phone calls later the agent said he couldn’t do that, it’s either standby for direct flight or confirmed connecting flight. Since I would be second on the standby list, he dictated the standby and I took it.

So once past security, I raced to the food court and grabbed some food, since I hadn’t eaten much for more than 15 hours. Then it’s just praying for the best for the standby.

Flight 4910 to Washington Reagan was a 76-seater regional ERJ-175, but fortunately, I cleared the standby, together with a few other people. It’s a huge sigh of relief as I salvaged the trip. 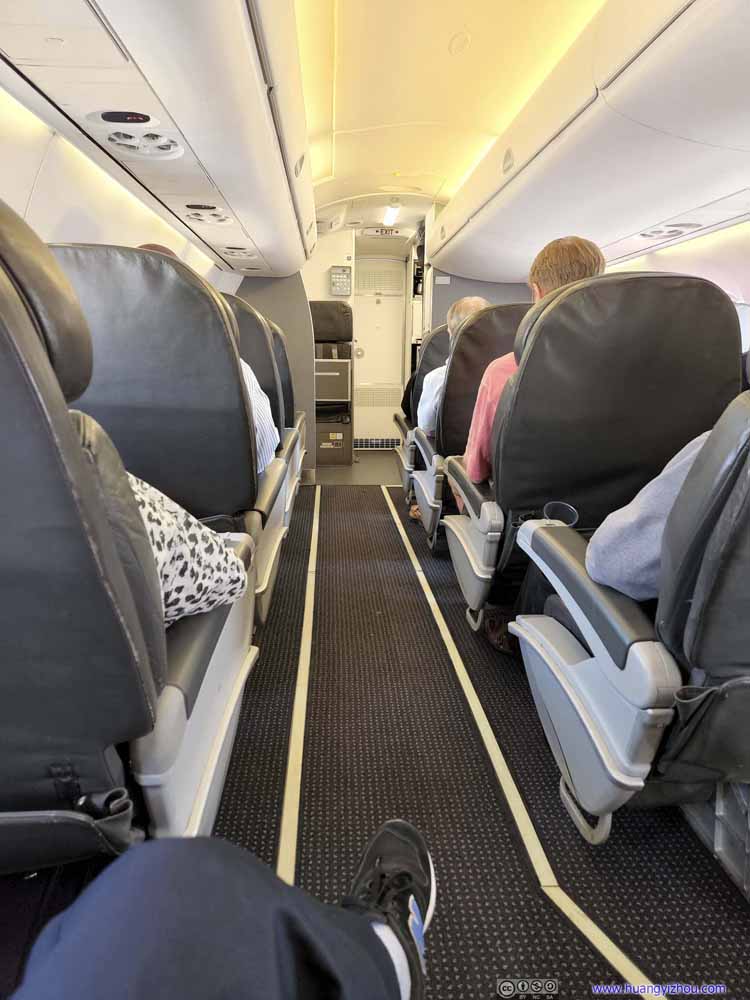 In Seat for Flight to Washington Reagan

Delays and Diversions, Flying American Airlines from Los Angeles to Washington DC via Philadelphia by Huang's Site is licensed under a Creative Commons Attribution-NonCommercial-ShareAlike 4.0 International License.